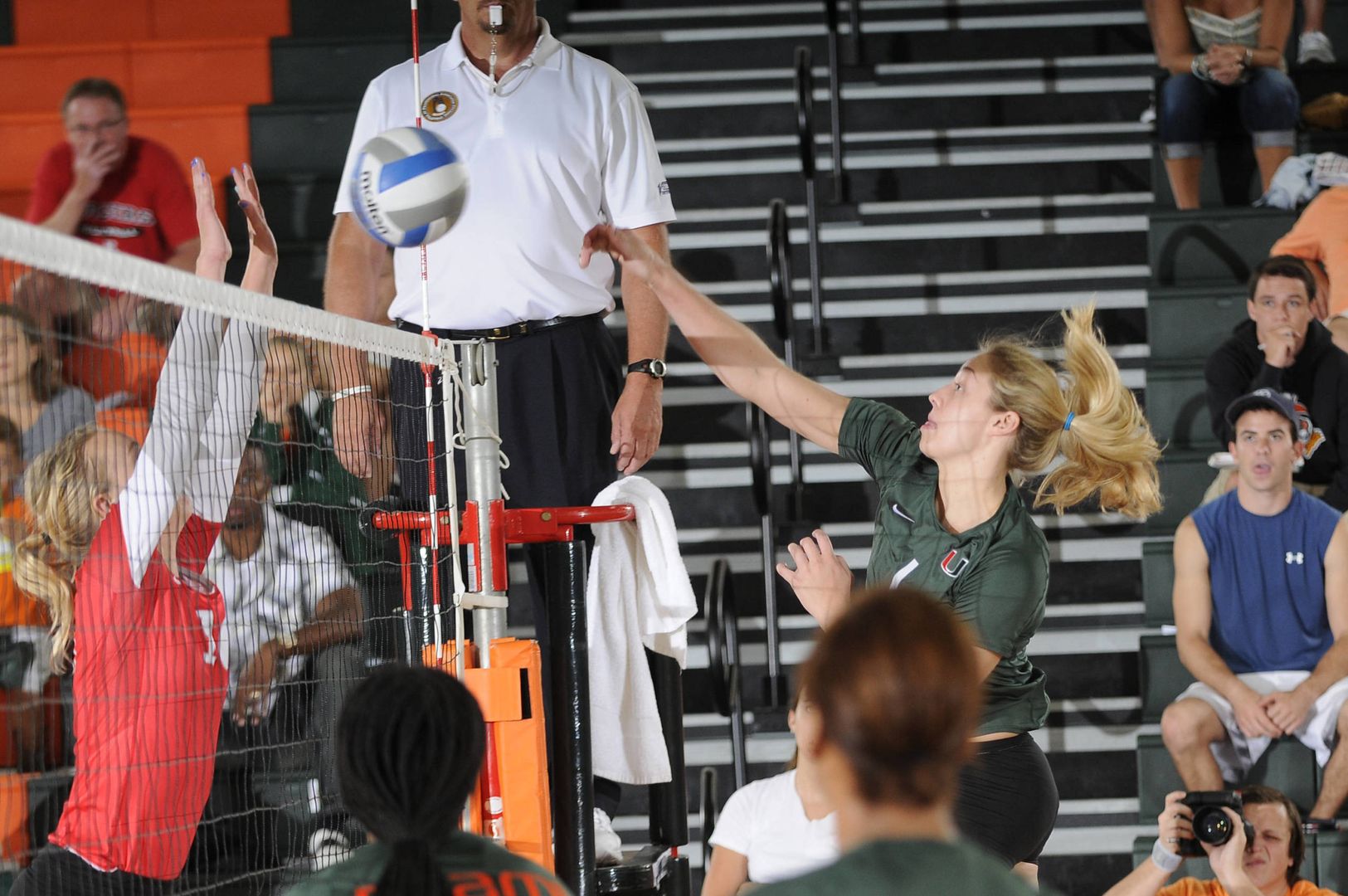 CORAL GABLES, Fla. — With the threat of severe weather in the area, the University of Miami volleyball team received contributions from all over the court to defeat Samford, 3-1, in the finale of the Hurricane Invitational on Saturday at the Knight Sports Complex. UM finished the weekend 4-0, with junior Alex Johnson winning Tournament MVP. Junior Taylor Hollins and sophomore Alexis Mourning were named to the All-Tournament Team.
The Canes lost the first set 25-20, but recovered to win the next three by the counts of 25-18, 25-16 and 25-19. The team has won 21-straight non-conference regular season matches and the last 13 outside of the Atlantic Coast Conference at home.
“I am really pleased with the way we played,” said head coach Nicole Lantagne Welch. “We learned that we can be pretty good, but also learned that we have some work to do. I think we are in a good place heading into the second weekend having built some confidence.”
Sophomore Savanah Leaf recorded a match-high 17 kills against the Bulldogs (0-3), while Hollins and Johnson had 15 and 11 slammers, respectively. Hollins recorded a double-double with 19 digs.
After dropping the opening set, the Hurricanes responded with balanced attack that led to a .378 hitting percentage for the match. On the other side of the net, UM recorded 12 more digs than its opponent (52-40), while senior setter Nrithya Sundararaman notched 40 assists.
“We have talked about developing team depth throughout the preseason and I thought it showed this weekend,” Lantagne Welch said. “We have so many players that can play key roles and back each other up. That makes us so much stronger and it is great to have so many different options.”
UM will hit the road for the first time to take part in the Redbird Classic at Illinois State next weekend, playing Oregon State, Illinois State and Presbyterian from Aug. 31-Sept. 1.
The ticket office is pleased to offer season tickets for both volleyball and soccer for just $50. Season tickets to the home volleyball schedule at the Knight Complex can be purchased for $35, with single match tickets available for as low as $3. Call 1-800-GO-CANES to order your tickets today.
For all the latest information on the Miami Hurricanes, follow the official Twitter feed, @HurricaneSports, or “Like Us” on Facebook at facebook.com/MiamiHurricanes. Follow @CanesVB on Twitter for specific news on UM volleyball.