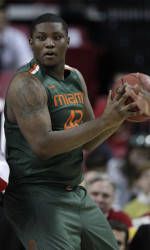 COLLEGE PARK, Md. (AP) – James Padgett scored 16 points, including a pivotal three-point play in the final minute, and Maryland held Miami without a basket over a nine-minute stretch in a 75-70 victory Tuesday night.

Maryland (16-11, 6-7 Atlantic Coast Conference) trailed 66-61 before rallying with a 10-0 run during the final two minutes. A 3-point shot by Sean Mosley and a three-point play by Padgett preceded two three throws by Mosley and two more by Terrell Stoglin.

Stoglin finished with 20 points on 6-for-17 shooting and Mosley contributed 15 points.

After Durand Scott connected for Miami with 9:07 remaining, the Hurricanes didn’t make another field goal until Shane Larkin canned a layup with 16.9 seconds left. Despite the drought, Miami kept finding its way to the foul line and held a five-point lead with 2:04 remaining.

Game Notes
– Miami’s starters for the game were Shane Larkin, Malcolm Grant, Durand Scott, Kenny Kadji and Reggie Johnson. This lineup is now 5-3.
– Miami’s bench continues to be productive, scoring 26 points against Maryland and 155 points in the past eight games.
– With a pair of three-pointers, Malcolm Grant has made multiple threes in 15 games, including seven-straight games to start the season.
– Trey McKinney Jones drained three shots from distance and has hit at least two threes in 11 games.
– Kenny Kadji has scored more than 11 points 18 times this season, notching 16 against Maryland tonight.
– Against Maryland, Raphael Akpejiori played significant minutes (7) for the first time since the game vs. the Terrapins on Feb. 1 when he scored four points in 10 minutes.
– DeQuan Jones finished the night with seven points and four rebounds. He has now scored more than four points in 11 outings and grabbed more than three rebounds eight times despite only averaging 16 minutes per game.
– The Canes are now 12-8 against the Terrapins overall.
– UM is 11-3 at home and 5-7 away from the BankUnited Center this season.  In ACC play, Miami is 4-2 in Coral Gables and 3-4 on the road.