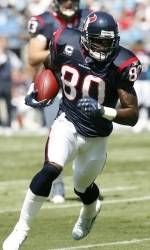 CORAL GABLES, Fla — The Monday Morning ProCanes report will weed through all the NFL highlights and news to bring you the information you care about the most… what the former University of Miami Hurricanes did during the week prior. After a strong start to the season, the former Canes carried their success into week two, building their now famous streak to a consecutive 141 regular season weeks with a Hurricane in the endzone.

There were major Cane contributors in all three phases of the game on Sunday, but four performers stood out in week two:

Andre Johnson (Houston Texans): 7 receptions, 93 yards, 1 touchdown
The connection of Texans’ quarterback Matt Schaub to the wideout Johnson was pivotal yet again on Sunday, as Johnson burned the Miami Dolphins for 93 yards and a touchdown. The five-time Pro Bowler, who had a 43-yard diving grab late in the second quarter, capped off another stellar performance with a beautiful move on coverage for his second touchdown catch of the season (and threw up “the U” in celebration). Johnson and the Texan offense proved too hot to handle for the Dolphins, as Houston won 23-13 and improved their record to 2-0 on the young season.

Santana Moss (Washington Redskins): 5 receptions, 61 yards, 1 touchdown
Though his numbers were by no means eye-popping, Moss had a crucial touchdown grab late in the fourth quarter that would help the Redskins erase a late eight-point deficit. Despite a failed two-point conversion, Moss’ 18-yard touchdown pass from quarterback Rex Grossman helped set up the Redskins for a game-winning field goal in the fourth quarter. Moss, who had six catches for 76 yards in the team’s opening win against the New York Giants, continued his strong start to the season and helped lead the Redskins to a 22-21 win over the Arizona Cardinals.

Willis McGahee (Denver Broncos): 28 carries, 103 yards, 1 touchdown
The former Canes running back, cut by the Baltimore Ravens before the start of the season, proved he is still deserving of a feature back role on Sunday at Mile High. In the Broncos’ win over the Cincinatti Bengals, McGahee did what he does best: wear down a defense. Carrying the ball a whopping 28 times, McGahee posted his first 100-yard game of the season. McGahee, who scored his first touchdown for the Broncos on a bruising one-yard run, helped lead the home team to a 24-22 win over the Bengals.

Vince Wilfork (New England Patriots): 2 tackles, 1 interception
The 325-pound anchor of the Patriots defense recorded his first career interception on Sunday, catching his own tipped pass from San Diego Chargers quarterback Philip Rivers just before halftime. The three-time Pro Bowler and team captain displayed his renowned athleticism on the play, rumbling 28 yards up the sideline after securing the ball. With the Chargers driving late in the second quarter, it was Wilfork’s interception that helped turn the momentum in favor of the home team.  The Patriots would kick a late field goal three plays later to build their lead at halftime, and wound up winning the game by a final score of 35-21 at Gillette Stadium.

Two more ProCanes will take the field before week two is in the books. Antrel Rolle and Kenny Phillips will start in the secondary tonight for the New York Giants, as they take on the St. Louis Rams at MetLife Stadium in East Rutherford, N.J. Kickoff for the game is set at 8:30 pm Eastern on ESPN.