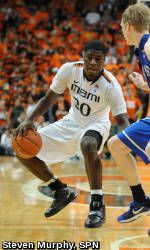 GREENSBORO, N.C… The University of Miami men’s basketball team returns to the road for its final non-conference game of the regular season, paying a visit to UNC Greensboro of the Southern Conference in a Tuesday tilt at Greensboro Coliseum — site of March’s ACC Tournament. The game will be carried on 560 WQAM (WQAM.com) and a live web stream will be available free of charge online.

The Hurricanes are the fourth ACC team to visit the Spartans in Greensboro Coliseum this season — joining Florida State, Virginia Tech and Duke. UNCG has also visited three ACC home courts, dropping all six games versus ACC teams in 2010-11 by an average of 24.5 points per outing. Tuesday marks the first meeting between the Hurricanes and Spartans, however Miami has put together a 3-2 record at the Greensboro Coliseum in a pair of ACC Tournament appearances there in 2005-06 (1-1) and 2009-10 (2-1).

Miami — who had a three-game win streak snapped by No. 5/5 Duke on Sunday — has three players averaging double-figure scoring, led by the backcourt of Malcolm Grant and Durand Scott. Scoring in double figures in 19 of his last 21 games, Grant is contributing a team-high 15.2 points and 3.4 assists per game, while converting 87.1 percent from the line (2nd in the ACC), 42.1 percent from the field and an ACC-best 43.6 percent from long range, with league-high 2.6 three-pointers per game. Scott adds 13.5 points, 4.2 rebounds and 3.3 assists per game, shooting 43.7 percent from the field, 41.2 percent from downtown and 86.6 percent from the line (3rd in the ACC). Big man Reggie Johnson — who knocked down a career-high 25 points in his homecoming at Wake Forest on Feb. 9 — has notched 10 double-doubles this season, and is averaging 12.6 points, 9.7 rebounds and 1.3 blocks per game.

Sixth-year player Adrian Thomas made his 100th career appearance in the Nov. 21st game at Rutgers, becoming the 34th Hurricane to accomplish this. Former teammates James Dews (2006-10) and Brian Asbury (2005-09) hold the Miami program record for career appearances with 130 apiece. With 121 career appearances to date, he is tied for eighth in program history with Robert Hite (2002-06) and Kevin Presto (1985-89). Should Thomas play in every game during the regular season, he will tally 127 appearances with an opportunity to break the record in the postseason.

The Hurricanes hit the road for four of their final six regular-season games… Miami has two of the ACC’s top-four most prolific three-point shooters in Malcolm Grant (2.6 pg, 1st) and Adrian Thomas (2.4 pg, 4th)… Former `Cane and current Miami Heat player James Jones is one of six participants competing in the NBA All-Star three-point contest on Feb. 19. As a Hurricane, Jones knocked down 124 three-pointers between 1999-2003, 12th most in program history. He converted 47.1 percent (41-87) as a sophomore for the second-best single-season percentage in UM history, while shooting 38.3 percent over his career — seventh best in the UM recordbooks… Miami is 7-0 when shooting at least 50 percent from the field, 10-2 when leading at halftime, 11-5 when scoring at least 70 points and 9-2 when holding its opponents under 70 points… With a pair of three-pointers versus Duke, Adrian Thomas moved into sixth place in the UM record book with 171 career threes and needs just three treys to climb into UM’s top five. He has hit a three in 10-straight games for the fourth-longest active streak in the ACC.

Big man Reggie Johnson scored a career-high 25 points and nailed a pair of free throws with just four seconds remaining at Wake Forest on Jan. 9 to seal Miami’s first road ACC win since 2009… He has scored in double figures in five of the last seven games and is averaging 19.0 points, converting 70.0 percent from the field (21-30) and 71.4 percent from the line (15-21) over the last three games… Sixth-year player Adrian Thomas notched his first career double-double in the overtime win over Virignia, with career highs of 20 points — including six three-pointers — and 10 rebounds… Thomas is averaging 12.0 points and 5.7 rebounds per game over his last three appearances.

Seventh-year head coach Frank Haith and the Hurricanes have defeated 32 of its last 35 non-conference opponents during the regular season. Miami had won 22-straight until the72-68 loss at then-No. 19 Memphis, in a game that tipped at midnight to kick start ESPN’s hoops marathon. The `Canes have won 20-straight regular-season non-conference matches at home, last falling to Ohio State, 73-68, in the ACC/Big Ten Challenge on Dec. 2, 2008.

Miami and Boston College are the only schools to have three players ranked among the league’s top-20 scoring leaders, as the Hurricanes have Malcolm Grant (15.2 ppg, 7th), Durand Scott (13.5 ppg, 12th) and Reggie Johnson (12.6 ppg, 17th) among the league’s best.

Individual game tickets for Miami’s ACC games are now on sale to the general public. Prices for most ACC games begin as low as $15. For additional information or to order season tickets, please contact the Hurricane Ticket Office online at www.hurricanesports.com or by phone at 1-800-GO-CANES.