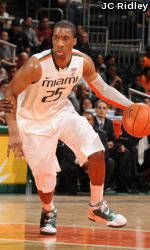 Adams is Getting to the Point

CORAL GABLES, Fla. – Seeing a need and recognizing a potential solution, Frank Haith approached Garrius Adams this past offseason about a new role. The `Canes could use more help at the point and Adams was quick to oblige.

“I think I’ve always wanted to just have the ball in my hands, whether it is dribbling, passing, shooting or calling a play,” Adams said. “It doesn’t really matter where I play as long as I am involved and making everyone around me better.”

The decision – and more importantly the adjustments Adams has made since – is gradually paying dividends for the Hurricanes, who have won back-to-back games and are now 14-9 overall and 3-6 in Atlantic Coast Conference play.

“Coach challenged me,” Adams said. “The more positions I am able to play, the more plays I have to remember and more defensive sequences I need to be aware of. It makes me smarter as a player and it helps my teammates because now I can tell them exactly where they need to be because I’ve played so many different roles.”

At 6-foot-6, Adams has the size to match up with small forwards and the quickness to run with most any guard. As a freshman last season, the North Carolina native spent most of his time on the wing, averaging 3.8 points and 3.1 rebounds in just under 17 minutes a night.

“Last year was what I expected,” Adams said. “I expected to get experience and play the role the team needed me to play…play defense, shoot three’s and just be consistent.”

A year later, Adams has nearly doubled his point production and is spending a lot more time on the court, specifically at the top of the key.

“I’ve been a lot more aggressive this year,” Adams said. “I think being so much bigger than a lot of guards I am able to get in more passing lanes and get more steals. Playing at the top of the zone, I can put my size to use and as long as I stay active, it can really help the defense tremendously.”

The numbers from last year to now bear out a significant spike in production in Adams’ game. After recording just 23 steals in 32 games as a freshman, he already has a team-high 25 this year with plenty of season ahead. Same can be said for his assists, which have jumped from 19 to 41. He is averaging 7.3 points and 28.5 minutes per contest, both big spikes from last year.

“This year I have stepped up in a lot of different places,” Adams said. “I’m handling the ball a lot more, playing more minutes, more positions and a have greater role on the defensive end.”

Even his three-point shooting, something he struggled with as a freshman and worked on all offseason, has improved. He is currently hitting on 33.8 percent of his attempts behind the arc, up from 29.2 a season ago.

“That has been a tremendous focus for me,” Adams said. “It’s been a challenge. I should have shot a lot better last year. There might have been a little bit of nerves in the beginning, but this year I’ve really settled down and stayed focused.”

While his overall numbers have greatly improved across the board, it is his play as of late that has been even more impressive. Over UM’s last eight contests, Adams is averaging 9.0 points and 4.3 rebounds per game. He has scored in double figures five times over that span and in the Hurricanes’ overtime victory over Virginia on Saturday, he came just shy of recording his first career double-double with eight points and a career-high nine rebounds.

The move to the point is certainly paying off for Adams and the `Canes. And while Haith and Adams himself deserve most of the credit, he says backcourt mates Malcolm Grant and Durand Scott have really helped him in learning the top of the zone and defensive rotations.

Ultimately though, it comes down to Adams and his ability to create match-up problems for opposing guards.

“I think it just goes up from here,” Adams said. “The coaches have been talking to me about staying aggressive. They recognize the progress I have made, but they’ve also said they know I can do a lot better and I agree.”

Miami has eight regular season games left on its schedule, seven of which are against ACC teams. How the `Canes finish will have a lot to do with how Adams plays down the stretch.

At this point, there’s no doubt he’ll be ready.

“It’s all about confidence now,” Adams said. “Whatever it takes to make our team better, I’m here to do.”