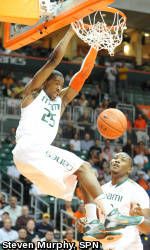 CORAL GABLES, FLA… After opening its ACC slate with back-to-back road games, the University of Miami men’s basketball team returns to the friendly confines of the BankUnited Center for the first time in 2011 to play host to Boston College in the ACC home opener for the Hurricanes on Sat., Jan. 15, at 6 p.m. in a game to be televised by ESPNU.

Miami is 5-1 in ACC home openers since joining the league in 2004-05, the same season head coach Frank Haith took over the program.

The `Canes, who have won four of its last six games and nine of its last 12, host three of their next four ACC contests.

Former Hurricane and two-time First Team All-ACC selection Jack McClinton, who is playing professional basketball in Israel, won the three-point contest among the pros over there this week. As a senior in 2009, he won the NCAA three-point contest in Detroit.

THE EYE OF THE STORM The Hurricanes, winners in nine of their last 12 games, are led by three players averaging double-figure points. Malcolm Grant is contributing a team-high 15.5 points per game — seventh-best in the ACC, and also ranks among the league’s leaders in free throw percentage (.908, 2nd/14th in the NCAA), three-point field goal percentage (.441, 3rd/26th in the NCAA), three-point field goals made (2.6, 2nd) and assists (3.8, 9th). Coming off a 24-point performance at Clemson, Durand Scott adds 13.9 points and 3.3 assists an outing, converting better than 45 percent from the field and shooting a much-improved 86.6 percent from the line (compared to 67.0 percent as a freshman in 2009-10). Reggie Johnson averages nearly a double-double with 12.3 points and 9.7 rebounds per game (3rd in the ACC, 28th in the NCAA), while shooting 72.6 percent from the charity stripe.

THE SERIES With a conference rivalry dating back to both programs’ Big East days, Boston College has been Miami’s Achilles’ heel in the past. The Hurricanes have won three of the last five meetings between the programs, but prior to a 74-61 win in Coral Gables on March 5, 2008, UM had dropped 13-straight games to Boston College, as the Eagles lead the all-time series 24-11. BC won both meetings versus UM last season by a combined margin of five points.

At a perfect 3-0 in ACC play this season, the Eagles ride a two-game win streak into Coral Gables, coming off Tuesday’s 75-66 home victory over NC State. Reggie Jackson led BC with a game-high 29 points, six assists, five rebounds and three blocks in 36 minutes on the hardwood.

Boston College boasts four players with double-figure scoring averages, led by Jackson — the ACC’s second-leading scorer with 19.5 points, 4.5 rebounds and 4.7 assists per game. Over three ACC games this season, the junior guard is averaging 23.3 points an outing — converting 73.3 percent from the floor, 63.6 percent (7-11) from long range and 95.0 percent (19-20) from the charity stripe.