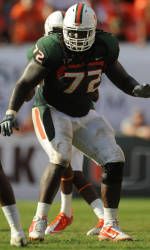 Miami’s nine selections were second to only Virginia Tech’s 11 on the first- and second-teams.

Linebacker Colin McCarthy was the 10th `Cane honored as he was recognized as an honorable mention performer.

Hankerson is coming off one of, if not the most productive season for a wide receiver in school history. His 12 touchdown catches this season is a Miami record, breaking Michael Irvin’s mark of 11 set in 1986. In the Hurricanes’ regular season finale, Hankerson became just the third player in program history to record a 1,000-yard receiving season and the first to have 2,000 yards for a career and 1,000 yards in a season.

Washington had a break-out year as Miami’s primary right guard, winning ACC Offensive Lineman of the Week twice this season while grading out above 90 percent in all but one of Miami’s games.

Bosher’s All-ACC honor as a punter was his second in as many years after earning second-team honors a season ago. This season, Bosher led the ACC in punting in conference games with an average of 44.7 yards per boot. On the year, he averaged 44.3 yards per punt, with 17 of 50 or more yards and 19 inside the 20-yard line.

The 2010 All-Atlantic Coast Conference football team as voted on by 61 members of the Atlantic Coast Sports Media Association. NOTE: A first-team vote was worth two points and second team vote one.