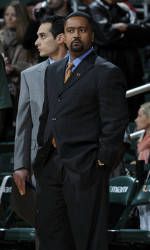 CORAL GABLES, Fla. – While LeBron, Dwyane and Chris quickly made Miami the NBA’s epicenter this past summer, it’s a guy named Durand that has everyone talking in college basketball circles.

One of the rising stars in the sport, sophomore guard Durand Scott has made people take notice in his short time in Coral Gables. He was listed on several Wooden Award Preseason ballots and ESPN’s Dick Vitale named him one of 10 sophomores to watch nationally this year. The list continues to grow as the season approaches.

A product of New York City’s famed Rice High School, Scott brings a style of play that is both entertaining and dynamic. It’s a style that Stephon Marbury, Mark Jackson, Jamaal Tinsley, Sebastian Telfair and so many other guards from the city have shown us before… almost like they are created from the same mold.

That style is what has so many people talking. The ACC is well known for a being a guard-heavy league with a rich history of point guard royalty. Scott has the potential to be Miami’s first name on that prestigious list.

“Durand has really worked on his game,” head coach Frank Haith said Friday before practice. “He has become a better shooter – a more consistent shooter – and the other thing is that he has shown tremendous leadership. You saw the last 10 ball games last year when he averaged almost 17 points per game. He’s capable of being that kind of player.”

And if you watched the Hurricanes play late last season, it’s hard not to think that the team Haith has assembled around Scott isn’t primed for another NCAA Tournament run.

“With the vibe I feel this year, I believe we are going to open some eyes and surprise people,” Scott said. “I can’t wait for that day to come. We are not going to back down.”

That run started Friday, as Haith, Scott and the rest of the Hurricanes officially opened practice at the BankUnited Center 19 days before their exhibition opener on Nov. 3.

“It’s tremendously exciting,” Haith said of the start of camp. “We do have a lot of guys back and a team that finished strong last year. I think it’s a team that’s very talented and has a chance to be really good.”

Miami has everything you look for in a contender. An elite ball handler with the ability to take over a game in Scott; a sharp-shooting forward with precision from the outside in Adrian Thomas; and a developing big man with feel around the basket in Reggie Johnson. Add in the athletic DeQuan Jones, the heady Malcolm Grant and a much-improved Julian Gamble, and the `Canes have group of returners Haith has to feel good about heading into the 2010-11 season.

“I think that we’ll do some different thing s offensively than we’ve done in the past,” Haith said. “I think we’ll continue to do some things that we’ve always done defensively. I think that with our length on the perimeter, it will allow us to do some things to extend the defense a little bit. I’m excited about that. Offensively, we were second in the league in field goal percentage offense. This was a pretty good field goal percentage last year and we will continue to build on that.”

The building began Friday, but when it is all said and done it is going to come down to Scott and his ability to carry this team. Jack McClinton took that step in his second year with the program, leading the `Canes to the second round of the NCAA Tournament in 2008.

Now a sophomore, this team and this season belong to Scott. He took control Friday at the BankUnited Center.

“As a freshman, I wanted to give the seniors their respect,” Scott said. “This year I want to go out there and lead my team and put people in a position to do well. That’s what a leader is for.”

Some other notes around the start of practice….

– Based off of last year’s finish and without factoring in the newcomers, a potential starting lineup looks to be Durand Scott and Malcolm Grant at the guard spots, DeQuan Jones at the three, Adrian Thomas at the four and Reggie Johnson and Julian Gamble sharing time at center. That all can change in camp however. We’ll keep you updated…

– The `Canes have generally been predicted to finish anywhere from sixth to eighth in the ACC this year by most preseason publications. Some examples: Blue Ribbon Yearbook has Miami at No. 6, ESPN’s Jay Bilas put the `Canes at No. 7, while Sporting News has them at No.8.

– Sophomore Reggie Johnson averaged 15.5 points and 6.8 rebounds over Miami’s final four games last season while Dwayne Collins was limited with an injury. The late season surge by Johnson showed what the 6-foot-10, 303-pounder can do with opportunities, specifically against elite competition.

– Miami’s season-opener is just under a month away on Nov. 12 at home against Jacksonville. The `Canes first road game is at Memphis on Nov. 15 at midnight as a part of ESPN’s College Hoops Tip-Off Marathon.