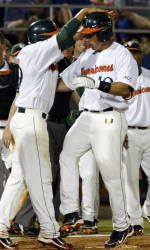 GAINESVILLE, Fla. – The 10th-ranked University of Miami baseball team’s 2010 season came to end Saturday night with a 4-3 loss to No. 3 national seed Florida in 10 innings at the Gainesville Super Regional at McKethan Stadium.

Miami closed out the season with an overall record of 43-20, while Florida (47-15) will advance to the College World Series after winning the first two games of the Super Regional.

The Hurricanes committed seven errors on the night, tying for the most errors in a postseason game in program history. Pitchers Chris Hernandez and Daniel Miranda combined to allow just one earned run in 10 innings, but for the second straight night errors were the difference in the end.

Down 2-0 heading into the bottom of the sixth, Nathan Melendres put the `Canes ahead for the first time in the super regional, smacking a three-run blast down the line in right. Miami maintained that one-run lead until the ninth, when back-to-back `Cane errors tied it up and sent the ballgame into extra innings. There, another UM error put a man on second for UF’s Austin Maddox, whose RBI double to right in the 10th won it for the Gators.

Scott Lawson and Chris Pelaez both finished 2-for-4, while Melendres was 1-for-3 with the big home run. Brian Johnson had two RBI for UF, while Matt den Dekker plated two of UF’s four runs.

Steven Rodriguez (2-0) earned the win for the Gators, tossing a scoreless inning in relief. Starter Hudson Randall pitched well, but was responsible for the first two Miami runs that scored on Melendres’ homer. Randall tossed 6 2/3 innings before turning it over to four UF relievers. In the end, Greg Larson recorded the final two outs of the 10th to pick up his third save.

Hernandez and Randall kept both offenses off the board until the top of the fifth, when a UM error, followed by an interference call set up a sacrifice fly to center by Brian Johnson to give the Gators a 1-0 lead.

Two innings later, UF added another run to put the Gators up 2-0 heading into the bottom of the sixth.

Melendres’ blast, which came after singles by Lawson and Pelaez, put the `Canes ahead until the ninth, when the Gators tied it up and sent it into extra frames.