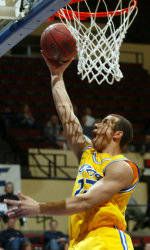 “I am pleased to welcome Trey to the team,” said Coach Haith. “In addition to being a dynamic athlete, he is also an outstanding young man. Like Jack McClinton a few years back, Trey is looking for the opportunity to play at a higher level, and he absolutely has the potential to be a very good basketball player. He was relatively unknown coming out of high school – he was competing in track & field and didn’t play AAU ball. But he has a strong athletic background and really has all the qualities that give him the chance to contribute greatly to this program.“

The 6-5, 205-pound combo guard played in all 61 games and made 38 starts in two seasons with the University of Missouri-Kansas City. As a sophomore in 2009-10, he averaged 10.9 points in 28.5 minutes per game, while shooting a team-high 47.6 percent from the field and 74.2 percent from the line. In addition, the Milwaukee, Wis., native was second on the team with 60 assists and added 3.8 rebounds per game.

McKinney-Jones scored in double figures in 17 games last season, including a season-high 22 points versus eventual Summit League champion Oakland, while his dunk – en route to 19 points and nine rebounds – versus Centenary on Feb. 25 garnered him ESPN SportsCenter‘s No. 1 Top Play of the Day recognition.

Named to the Summit League’s Winter/Spring Academic All-League Team in 2009, McKinney-Jones earned First Team All-Southeast Conference honors after averaging 15 points, 6 assists and 5.7 rebounds per game as a senior at South Milwaukee High School en route to the program’s first North Division Championship in 22 years. A Wendy’s High School Heisman Trophy winner for the state of Wisconsin, he was also an excellent track & field athlete, winning back-to-back state triple jump titles in 2007 and 2008 and finishing runner-up in the long jump in 2008.

McKinney-Jones hails from an athletic family, as his uncle Mark Jones played professional basketball both for the Orlando Magic and overseas. Additionally, his aunt Esther Jones won an Olympic gold medal for the United States in 1992 as a member of the 4×100-meter relay, and was also a two-time national champion sprinter, 21-time All-American and part of six NCAA championship teams at LSU.