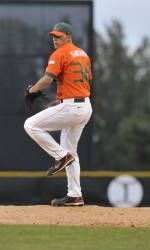 CORAL GABLES, Fla. – The seventh-ranked University of Miami baseball team hit three home runs and got another solid start out of Jason Santana to pick up an 11-1 win over Barry Saturday night at Alex Rodriguez Park.

The Hurricanes improved to 36-11 overall with the win and 19-0 all-time against Barry. It also marked Miami’s 16th-straight win at Alex Rodriguez Park.

Miami pitchers combine to allow just one run on seven hits and four walks while striking out 36 in the two-game set against Barry.

Stephen Perez, Yasmani Grandal and Zeke DeVoss all finished with two hits for the `Canes. Grandal and DeVoss each drove in a pair of runs, while Harold Martinez and David Villasuso each hit a three-run homer. Scott Lawson scored three of Miami’s 11 runs.

Barry starter Scott Sexton (2-6) allowed six runs – five earned – on six hits while walking two in 1 1/3 innings to suffer the loss. From there, Brad McAllister, Charley Short, Brett Hammaker and Aaron Main went the rest of the way for the Bucs.

The `Canes jumped on Barry early on, batting around in the bottom of the first and scoring five two-out runs to grab a comfortable lead after one. Michael Broad singled to right to start the rally before a Lawson walk put runners on first and second. Two batters later, Chris Pelaez’s bloop single to center scored Broad for the first run of the game. Martinez followed that up with a three-run blast to left to clear the bases and put the `Canes up four. Melendres then singled, Chantz Mack reached on an error and DeVoss followed with a single of his own to score Melendres to put UM up 5-0.

Broad plated his second run in the second when Grandal’s double to left-center scored him all the way from first to put the `Canes up by six.

Barry scored its only run when Drew Dwelly walked to lead off the fourth before moving to second on a steal, third on a groundout and home on a wild pitch.

Grandal drove in another run in the fourth, singling home Lawson after he doubled to lead off the frame.

The `Canes scored their final four runs in the bottom of the eighth on a solo shot to center by DeVoss and a three-run blast to left by Villasuso.

The Hurricanes take their second straight mid-week off before traveling to Atlanta to take on No. 5 Georgia Tech in a three-game series at Russ Chandler Stadium, May 14-16.