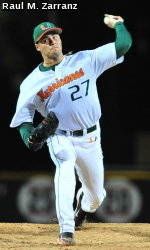 Hernandez Pitches No. 11 Miami Past Maryland, 5-1

Miami improved to 32-11 overall and 16-6 in Atlantic Coast Conference play, winning its ninth straight ACC home game and its 12th straight home game overall. The Terrapins fell to 15-31 overall and 4-18 in league play with the loss.

Hernandez (6-2) scattered eight hits while walking one and striking out four to earn the win. Taylor Wulf tossed a scoreless eighth in relief of Hernandez, before Daniel Miranda came on to toss a scoreless ninth.

Maryland starter Brett Harman (4-7) suffered the loss, allowing four runs on eight hits while walking three and striking out 10 in 6 1/3 innings. Four Terrapins finished with multiple hits, including Gary Schneider who drove in Matthew Murakami on a RBI single in the fourth to score the first run of the game.

The score remained 1-0 Maryland until Melendres hit a towering solo homer to left in the bottom of the fifth to even it up. The `Canes weren’t done however, loading the bases twice, scoring two more runs on a wild pitch and a sacrifice fly to go up 3-1 after five.

Ratcliff made it 4-1 in the seventh on an opposite field solo shot towards the scoreboard in left before he brought in UM’s final run on a sacrifice RBI bunt an inning later.