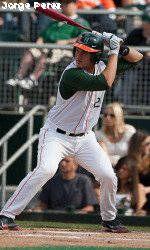 The Hurricanes (25-9, 12-4 ACC) scored four runs in the first inning and plated runs in four of the first five innings off UNC ace Matt Harvey. The Tar Heels (22-14, 6-10 ACC) battled back, but the `Canes never relinquished their lead en route to the series-opening win.

Yasmani Grandal, who was named the ACC Player of the Week on Monday, raised his batting average to .417, going 2-for-4 with a homer and three RBI on the evening. Grandal has now hit safely in eight straight and has 26 RBI in UM’s last 15 games.

Harold Martinez had three of UM’s eight hits, going 3-for-4 with his team-leading 10th homer of the year. Zeke DeVoss had UM’s other homer – a solo shot to lead off the first – while Scott Lawson had a hit, an RBI and a run and Michael Broad added a hit.

UM starter Chris Hernandez improved his record to 5-2 after tossing five innings, giving up five runs with three of them earned. The junior, who scattered eight hits on the night, was also on the mound in Miami’s last win over the Tar Heels in 2008.

Daniel Miranda earned his second save of the season after throwing two scoreless innings, allowing just one hit while striking out three.

Harvey (4-2) suffered the loss for the Tar Heels, allowing seven runs – five earned – on eight hits in seven innings. The Hurricanes’ three home runs off UNC Harvey were the first three given up by the highly-touted righty on the season and the five earned runs were the most allowed by Harvey this season.

Brian Goodwin led the way at the plate for the visitors, going 2-for-4 with a pair of RBI. Levi Michael also had two hits while scoring a game-high three runs.

DeVoss led off with an opposite field homer off the leftfield foul pole to get UM’s first-inning rally going. Stephen Perez followed with a walk and then a UNC error put runners on the corners for Grandal, who doubled to left to bring both guys in. Grandal eventually scored three batters later on another Tar Heel error.

UNC responded with a run in the second and two more in the third before Grandal put the ‘Canes ahead 5-3 after three with his eighth homer of the season on a line shot to left.

An infield single with runners on the corners in the top of the fourth resulted in UNC’s fourth run to bring the Tar Heels within one.

Another UNC error led to UM’s sixth run in the bottom half of the fourth when Frankie Ratcliff scored from third on a Lawson single after Ratcliff had advanced to third on a two-base throwing error.

Michael homered to lead off the top of the fifth to bring the score to 6-5 Miami but Martinez’s homer to left put the ‘Canes back up two in the bottom half of the frame.

The `Canes and Heels will play game two of the series Saturday night at 7 p.m.