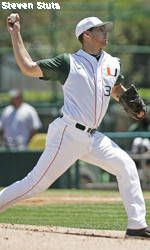 CORAL GABLES, Fla. – The 15th-ranked University of Miami baseball team used a huge third inning to conclude a sweep of Wake Forest, winning 10-1 Sunday afternoon at Alex Rodriguez Park. Chris Pelaez drove in four runs and Jason Santana tossed six scoreless to earn the win as the Hurricanes improved to 20-7 overall and 10-2 in Atlantic Coast Conference at the mid-point of the 2010 campaign.

The series victory was the fourth in a row for the Hurricanes to open ACC play – a stretch that includes wins for 10 in Miami’s last 11 league games.

Pelaez went 1-for-4 on the day, but provided a three-run triple to spark Miami in a seven-run third inning. David Villasuso had one of his best days at the plate, going 3-for-4 with a pair of runs. Eight of nine starters for the Hurricanes scored a run and recorded at least one hit.

Santana (3-1, 4.46 ERA) allowed just two hits and four base runners while striking out five on the afternoon. It marked the third time in four ACC starts that Santana allowed one earned run or less.

The `Canes scored first on a RBI groundout by Stephen Perez in the bottom of the third. A two-run single by Scott Lawson then quickly put the `Canes up 3-0 before Pelaez’s three-run triple down the line in right broke the game open. Pelaez then scored on an error by the shortstop.

Solo home runs by Harold Martinez and Villasuso added to the Miami lead in the bottom of the fifth before Pelaez collected his fourth RBI of the day on a groundout in the sixth.

Wake Forest finally got on the board with two outs in the bottom of the ninth to break up the shutout, plating its only run on a bases loaded hit-by-pitch.

Series Notes
– The Hurricanes have now won four straight ACC series to open the year and have won 10 of their last 11 league games.
– Miami’s nine stolen bases on Saturday were the most since the Hurricanes recorded 10 against Clemson on June 2, 2001.
– David Villasuso led the `Canes in hitting in the series, going 5-for-10 with a homer, two RBI and three runs scored.
– Harold Martinez (3-for-10) hit two homers in the series and now has a team-high eight this year.
– Miami’s starting pitchers – Chris Hernandez, Eric Erickson and Jason Santana – combined to allow just two earned runs in a combined 18 innings of work against the Demon Deacons.
– Eight different Hurricanes scored multiple runs on the weekend as Miami scored 26 as a team in the three-game series against the Demon Deacons.
– Miami’s weekend starters have allowed three earned runs or less in 11 of 12 ACC starts this season.
– The Hurricanes have now won eight straight over Wake Forest and are now 22-5 all-time against the Demon Deacons.