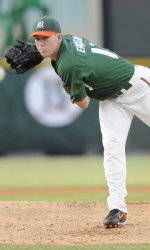 RALEIGH, N.C. – The 12th-ranked University of Miami baseball team earned its first road shut-out against an Atlantic Coast Conference opponent in four years with a 4-0 victory over NC State Sunday afternoon at Doak Field at Dail Park. Junior left-handed starter Eric Erickson earned the win, tossing 5 2/3 scoreless innings before relievers E.J. Encinosa and Eric Whaley combined to go the rest of the way and secure the series win for Miami.

Erickson (2-1) turned in his best outing since the season opener, scattering seven hits while recording four strikeouts. Encinosa allowed just one hit and struck out two in 2 1/3 innings while Whaley struck out one in the ninth.

Yasmani Grandal capped off a big weekend at the plate with a 2-for-4 performance Sunday. David Villasuso also had a pair of hits, while Zeke DeVoss, who reached base three times with a single and two walks, scored two of UM’s four runs.

The Hurricanes loaded the bases in the first on three walks before Harold Martinez’s infield single to second plated a first inning run for Miami for the third time in the series.

Nathan Melendres smacked a solo shot to left in the sixth to plate UM’s second run of the game before Scott Lawson’s sacrifice fly to center the following inning scored DeVoss to put the `Canes up 3-0.

Miami added an insurance run in the ninth on an error by Diaz after Frankie Ratcliff tripled to lead off the inning.

The Hurricanes will return to Alex Rodriguez Park this week to face FAU on Wednesday, March 31 at 6 p.m. before playing host to Wake Forest, April 2-4.

Series Notes
– Yasmani Grandal hit 9-for-14 and reached base on 11 of 16 plate appearances in the series. Grandal, who recorded multiple hits in all three games against the Wolfpack, recorded his first career triple on Saturday and finished with six RBI in the series.
– Sunday’s shut-out was the first for the `Canes against an ACC team on the road since shutting out Duke, 3-0, on March 17, 2006 in Durham.
– The series win was Miami’s third straight to open ACC play, including its second on the road in as many weekends after sweeping Duke in Durham last weekend.
– Nathan Melendres also had a solid weekend at the plate, going 5-for-12 with a homer and three RBI.
– Relievers E.J. Encinosa (3 2/3 IP) and Eric Whaley (1 1/3 IP) each appeared in two games in the series and combined to allow just two hits while striking out eight in six innings.
– Miami improved to 24-11 all-time against NC State, including an 8-2 mark in the last 10 meetings.