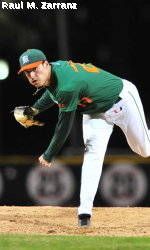 Hernandez (2-2), whose previous career-high of eight innings came twice during his freshman year in 2008, allowed just the one run on two hits while walking one and striking out six to earn his second win of the campaign. The complete game was the first for Miami since David Gutierrez tossed one against Jacksonville in the 2009 NCAA Gainesville Regional. It also marked the first complete game thrown by a ‘Cane in a true road game since J.D. Cockcroft accomplished the feat on April 11, 2003 at Virginia.

Scott Lawson was the lone hitter in the game to record multiple hits, going 2-for-3 with a double, a single, a walk and a run scored. Harold Martinez finished 1-for-4 but smacked his team-leading fifth homer with a solo blast to give Hernandez an insurance run in the eighth.

Jake Lemmerman and Joe Pedevillano had Duke’s only two hits, while Lemmerman’s RBI double in the third accounting for Duke’s lone run.

Duke starter Michael Ness allowed two runs on six hits while walking one and striking out two in five innings of work. Reliever Christopher Manno came on to start the sixth and pitched well, allowing just one hit – Martinez’s homer – in four innings of work.

After both teams were held off the bases in the first two innings, Miami got on the board in the third to go up 2-0. Lawson led off the frame with a double to the left field corner. Nathan Melendres proceeded to move him to third on a grounder to second before Zeke DeVoss singled through the right side, bring home Lawson for the game’s first run. Frankie Ratcliff immediately followed up DeVoss’ single to right with one of his own, putting runners on the corners with one out. During Stephen Perez’s following at-bat, Ratcliff successfully stole second while DeVoss broke home, sliding in safely as the throw came back in from second.

Duke put two of its first three batters on in the third with a walk and a hit-by-pitch before Jake Lemmerman’s double to right scored Marcus Stroman for Duke’s only run.

The score stayed 2-1 until the top of the eighth, when Martinez hit his solo homer over “The Blue Monster” in left to give the `Canes their third and final run.

The `Canes and Blue Devils will play game two of the series Saturday afternoon at 2 p.m. Right-hander Jason Santana (1-1, 6.63 ERA) will throw for Miami while lefty Eric Pfisterer (2-1, 5.95 ERA) will go for Duke.