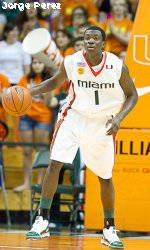 Fellow senior Marcus Ginyard added 12 points as the Tar Heels (16-14, 5-10 Atlantic Coast Conference) won consecutive games for the first time in 2010. Coming off a surprise win at Wake Forest, North Carolina got off to a fast start against the Hurricanes, then used a 13-0 first-half run to go ahead for good.

Hitting the 2,000-win mark provided an achievement in an otherwise frustrating centennial season for North Carolina, though Kentucky already reached that milestone in December. No. 2 Kansas has 1,997 victories heading into Wednesday’s game against No. 5 Kansas State.

Miami freshman point guard Durand Scott scored a season-high 29 points for the `Canes – the second-highest point production by an ACC rookie this season. For Scott, it was his second 20-plus scoring night on the season as he finished with 20 against Minnesota in the Big Ten/ACC Challenge.

Also scoring in double digits for the Hurricanes was sophomore guard Malcolm Grant, pouring in 12 points, while handing out a game- and season-high eight assists. Sophomore forward Julian Gamble supplied Miami with eight points (including knocking down his first career three-pointer at the end of the first half) and a career-high four blocks in his seventh career start in the post.

The `Canes return home to the BankUnited Center to close the regular season versus ACC and in-state rival Florida State on Sat., March 6, at Noon in an ESPN2 televised game. Miami will honor its three seniors – Dwayne Collins, James Dews and Cyrus McGowan — before the game.