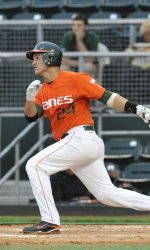 For the fourth time in its first seven games, Miami (6-1) reached double digit runs – plating its second-highest run total of the season. The game, played at the spring training home of the New York Yankees, was the first of two games at the first annual Florida Four event, with the second game between Florida and Florida State to be held later Tuesday night.

Four Hurricanes finished with multiple RBI, including Michael Broad, who finished 2-for-4 with four runs batted in. Grandal reached base in five of his six plate appearances, going 3-for-4 with three doubles, two walks, two RBI and three runs scored. Harold Martinez reached base four times – including three walks in his first three trips to the plate – and scored three times.

In his first collegiate appearance, Ewing allowed just two runs on six hits while walking one and striking out six. He held the Bulls scoreless through the first six as Miami jumped out to a 12-0 lead. He was relieved by right-hander E.J. Encinosa and left-hander Daniel Miranda, who combined toss the final 2 2/3 innings.

Ryan Lockwood was the lone USF hitter with multiple hits, going 2-for-4 with a run scored. USF starter Teddy Kaufman suffered his first loss of the season, allowing three earned runs in three innings of work. Six different pitchers finished out the game for USF (1-6) in relief of Kaufman and combined to allow eight earned runs over the final six innings.

Miami jumped out to an early lead with three runs in the top of the first. After Zeke DeVoss reached on an error to lead off the game, a double by Stephen Perez and a walk by Scott Lawson loaded the bases with no outs. Grandal followed that up with a double down the line in left, scoring both DeVoss and Perez to put runners on second and third. Two batters later, a Chris Pelaez grounder to first brought home Lawson for the third run of the inning.

Back-to-back walks with one out in the third started UM’s second rally of the game. With Pelaez on second and Martinez on first, Broad singled to right, bringing home Pelaez and putting runners on the corners. On a pick-off attempt of Broad, an error by USF shortstop Chad Taylor allowed Martinez to come home to give UM a 5-0 advantage.

UM went up 9-0 with four more runs in the top of the fourth. Lawson scored the first run of the inning on a Pelaez single before a bases-loaded triple by Broad to right-center put the `Canes up nine.

The `Canes added three more runs in the fifth, two in the eighth and another in the ninth.

USF plated two late runs in the seventh on a bases loaded walk followed by a run-scoring wild pitch.

The Hurricanes will step away from regular season play on Wednesday when the team heads to Jupiter to take on the Florida Marlins in an exhibition contest at Roger Dean Stadium. Game time is set for 3:05 p.m.

Following the game against the Marlins, the `Canes will return to Alex Rodriguez Park this upcoming weekend to host in-state rival Florida, March 5-7. Game one of the series is slated for Friday night at 7 p.m. For tickets, call 1-800-GO-CANES or visit www.hurricanesports.com.