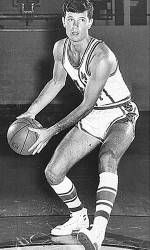 CORAL GABLES, FLA. – University of Miami Director of Athletics Kirby Hocutt and head men’s basketball coach Frank Haith have announced that three former Hurricane greats will be paid tribute to with the institution of honored jerseys. Jack McClinton (2006-09), Don Curnutt (1967-70) and Dick Hickox (1958-61) will have their jerseys raised to the rafters of the BankUnited Center during halftime of the home game versus Duke on Wed., Feb. 17.

“The University of Miami men’s basketball program continues to grow and elevate its standards for excellence,” Hocutt said. “With these honored jerseys, we take the opportunity to recognize some of the great Hurricanes players that have laid the foundation for where our program is today.”

“There have been some awesome basketball players at Miami over the years,” said Haith. “These three men in particular have meant a lot to this program, and were truly instrumental to the success of their teams and to Miami basketball as a whole.”

The selection of the honored jersey recipients is determined by the Director of Athletics and head basketball coach, in conjunction with an anonymous advisory committee. Criteria used in the selection process include athletic achievements at UM, commitment and loyalty to the continued success of the university and its athletic department and a personal commitment to courage and integrity.

Miami’s first two-time All-ACC First Team selection, McClinton led the Hurricanes in scoring for three-straight seasons – including 19.3 points per game as a senior in 2008-09, closing his career ranked seventh in UM history with 1,702 points. He is the ACC’s all-time most proficient three-point shooter, converting a league-best 44.0 percent over his career, while averaging 3.01 treys per game – the fifth-highest average in conference history.

McClinton, a second-round draft pick by the San Antonio Spurs in June, scored a career-high 38 points in the 2008 NCAA Tournament first round win over St. Mary’s (Calif.) and posted three-straight 30-point games as a senior versus Wake Forest (32), Duke (34) and North Carolina (35), becoming the first Hurricane to finish with 30-plus points in three-straight games in 20 years. The 6-1 Baltimore-native, currently playing professional basketball in Turkey, closed his collegiate career with a UM-best 35-game three-point streak – including hitting a career-high tying seven treys versus North Carolina and at Providence. He holds Miami records for career three-pointers (286), single-season three-pointers (101 in 2008-09), three-point field goal percentage in a game (4-4, 1.000) and career three-point field goal percentage (44.0).

The third-leading scorer in Hurricanes basketball history with 2,006 career points in just three seasons – before the advent of the three-pointer – Curnutt became Miami’s third All-American selection, earning second-team honors by both the AP and UPI in 1970, after averaging 28.4 points per game, converting 43.9 percent from the field and 86.1 percent from the free throw line. He averaged 26.1 points and 2.5 rebounds over 77 games in his three-year Miami career and was the first Hurricane to score more than 500 points in each of his first two seasons.

The 6-3 guard from Tipton, Ind., was a 10th round draft pick by the NBA’s New York Knicks and a seventh-round pick by the ABA’s Indiana Pacers in 1970, and continues to rank among UM’s best – posting three of the top-six highest scoring seasons, setting the UM record in career field goal attempts (1,816), ranking second in career field goals (813), fifth in career free throws made (380) and seventh in career free throw percentage (83.3), while tying Barry for the most 20-point games in UM history (61) – including 21 games of at least 30 points.

Hickox was the first All-American in Miami basketball history, earning second-team honors by both the AP and UPI in 1960, after averaging 22.1 points while shooting 47.6 percent from the field to lead the Hurricanes to a 23-4 record and their first NCAA Tournament appearance. The 5-6 guard from Ft. Wayne, Ind., was the first Hurricane to lead the team in scoring for three-straight seasons, and averaged 19.4 points and 4.3 rebounds per game over his three-year career.

A three-time UPI “Little Man All-American” who went on to serve as an assistant with the Hurricanes, Hickox is the ninth-leading scorer in program history with 1,529 points. He ranks third in program history in career free throws made (409), fourth with 41 20-point games – including four of 30-plus points, fifth in career free throw attempts (512) and eighth in field goals made (560). He will be represented at the ceremony by his wife Sylvia.

ESPN will broadcast Miami’s 7 p.m. game versus Duke. Tickets are available through the Hurricane Ticket Office at 1-800-GO-CANES.