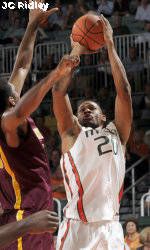 CORAL GABLES, FLA. – The University of Miami men’s basketball team heads north for the second time in three games for its second true road game of the season at Stetson.

The Hurricanes are 3-1 away from the BankUnited Center this season, with their lone loss in the ACC opener at Boston College on Dec. 6.

Miami defeated Stetson, 79-65, in their last meeting in Coral Gables on Nov. 29, 2008. Four of five UM starters finished in double figures, led by 14 points and eight rebounds by Cyrus McGowan, 12 points and seven rebounds by Dwayne Collins and 10 points and two steals by James Dews.

BOTH SIDES OF THE BALL

Guided by two young point guards in their first seasons as Hurricanes — redshirt sophomore Malcolm Grant and true freshman Durand Scott, Miami ranks 26th in the nation in assists average and has collectively dished out 20-plus assists in three games this season and 19-plus assists five times.

SHOOTING TO THE TOP

James Dews hit a career-high six three-pointers to finish with a game-high 20 points in Miami’s 91-54 win over South Carolina State on Saturday. Converting 6-of-8 three-pointers (.750) and 7-of-9 from the field, Dews jumped up two spots in the Miami record books with 139 career treys — knocking UM assistant coach Jake Morton out of eighth place. Dews’ six three-pointers ties for the most hit by an ACC player in a game this season, while his 139 total threes ranks fourth among active ACC players.

Malcolm Grant ranks second in the league averaging 2.5 three-pointers per game — converting 49 percent from beyond the arc, which ranks fifth-best in the ACC and 20th in the nation. He has hit a three-pointer in all 10 games this season — the fourth-longest active streak in the conference.

Winning their first eight games of the season, the Hurricanes got off to the fifth-best start in program history, and have since won nine of their first 10 games for the seventh time since Miami basketball began in 1926-27.

Senior Cyrus McGowan is graduating on Thursday with a degree in sociology… Adrian Thomas graduated in May and is currently enrolled in grad school at UM… Miami tied a school record with 15 3-pointers in Saturday’s win over South Carolina State… Sixth-year head coach Frank Haith is three wins from the 100th of his career… Nine of 13 Hurricanes are freshmen or sophomores.