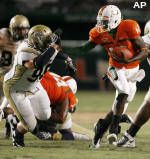 MIAMI (AP) — Miami quarterback Jacory Harris raised some eyebrows this week when he suggested the Hurricanes’ offense couldn’t be stopped.

Georgia Tech did nothing to disprove that theory.

Cool and in control throughout, Harris completed 20 of 25 passes for 270 yards and three touchdowns, and the 20th-ranked Hurricanes put an emphatic end to a four-game losing streak against No. 14 Georgia Tech with a 33-17 victory Thursday night.

Miami (2-0, 2-0 Atlantic Coast Conference) matched its best league start since 2004, outgained Georgia Tech 453-228 and set up a Coastal Division showdown at Virginia Tech on Sept. 26. Graig Cooper ran for 93 yards, Javarris James rushed for 72 more and a touchdown, and LaRon Byrd caught five passes for 83 yards and another score.

Georgia Tech (2-1, 1-1) blew Miami out a year ago, dooming the Hurricanes’ conference title hopes by rushing for 472 yards. This time, Miami handled the triple option with relative ease, holding the Yellow Jackets to 95 yards rushing — nearly half of those on the game’s first drive.

Tech’s reigning ACC player of the year, fullback Jonathan Dwyer, was slowed by a shoulder injury and finished with 7 yards on five carries. Josh Nesbitt completed 6 of 15 passes, all to Demaryius Thomas, for 133 yards, including a 56-yard touchdown midway through the fourth quarter.

Harris led Miami to scores on its first three possessions, the Hurricanes led 24-3 early in the third quarter after James scored from 3 yards out to cap a 60-yard, six-play drive, and the Hurricanes sauntered off celebrating their most significant win in years.

“Man, Georgia Tech last year and years before, they always stop us from going to the ACC championship,” Harris said. “But now, we had to come out and beat them. We were 0-4 … we were playing with a chip on our shoulder. We had to let them know, this can’t go on.”

Since taking a 24-0 lead against Clemson last Thursday night, Georgia Tech has been outscored 60-23.

Georgia Tech ran the ball on its first 12 plays, quickly forcing Miami into a series of frantic substitutions. Eric Moncur–Miami’s sixth-year defensive end who was injured most of last season and was held out of this year’s opener– got a big stop on third-and-6, forcing Tech to settle for a field goal.

The Yellow Jackets ran for 45 yards on that drive–and managed only 42 more the rest of the half.

Meanwhile, Harris was the picture of cool, setting the tone for the Miami sideline.

“As long as we play as a team,” he said, “we’ll come out with victories like this.”

He used seven receivers in the first half alone, the Hurricanes scored on their first three possessions and the big-play capability that Miami flashed against Florida State continued, with nine gains of at least 10 yards in the opening two quarters.

A 35-yard pass to Leonard Hankerson was immediately followed by a 40-yard toss to Byrd for Miami’s first touchdown. Dedrick Epps caught a 13-yarder for a 14-3 lead early in the second quarter, and Matt Bosher connected on a 34-yard field goal with 5:45 left in the half.

Meanwhile, even when Georgia Tech caught a break, the Jackets couldn’t cash in. A pass interference call against Vaughn Telemaque on fourth-and-12 from the Miami 29 extended one drive; the Yellow Jackets went for it there because kicker Scott Blair was 0 for 7 lifetime from outside 40 yards.