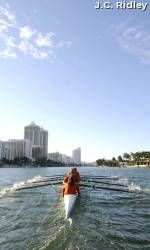 Day One Results in PDF Format

“One of the things we can use from today is the fact that we raced against tough competition,” expressed interim head coach Boban Rankovic. “We have to stay focused, and keep them going forward from here. We were very excited to be here, and race here. But at the same time, we have to try and use that to our advantage.”

The Hurricanes took part in races involving the First Varsity Eight, Second Varsity Eight and Novice Eight teams on the collegiate side. The first race of the day for Miami was the Women’s Collegiate Varsity Invitational “B” representing the Jessop-Whittier Cup.

Miami began the race in the thick of things with competitors USC, Wisconsin, Washington State and UCLA up through the first 1,500 meters. However, the Hurricanes were unable to keep that intensity and power going through the finish line, finishing fifth with a time of 6:58.88 overall.

“We did well up until the 1,500-meter mark, and the race was going as planned,” stated Rankovic. “What we have to work on is the last 500 meters, and staying ahead of everybody through that point.”

“The JV took third place, and the coaches and I are very excited and pleased with the results that they accomplished today,” expressed an enthusiastic Rankovic. “The girls are excited, and seeing them cross the line third–they looked confident and strong in doing it.”

Miami will race in the Heat “A” finals of the Jackie Ann Stitt Hungness trophy tomorrow beginning at 10:30 am [PST].

In the final race of the day, UM took part in the Women’s Collegiate Novice “A” for the Laurel V. Korholz Perpetual Trophy. The `Canes faced several good programs from USC, UC-Santa Barbara and UC-Irvine, holding their own throughout the 2,000-meter trek.

“We are the only true novice program here with an entire group of walk-ons that have never raced before in their lives,” added Rankovic. “Other teams have kids that have raced before in high school, and for us to compete well against those crews is very comforting to the girls and the coaches.”

“We’re pleased to e able to build a program up the way we’re doing, and competing against a lot of good teams out here in San Diego, it’s giving the chance for the University of Miami to get on the map within the rowing community.”

The action continues tomorrow for all three crews with the Hurricanes, as they take back to the waters for heat finals and consolation finals beginning at 9 a.m. [PST].

The Crew Classic and all races for the event will be streamed live at http://www.crewclassic.org/video/ over the two days. ESPNU will also broadcast the 2009 Crew Classic Highlights seven times, starting on May 7 at 7 p.m. [EST].