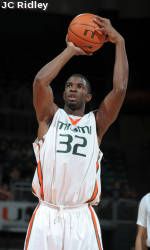 ATLANTA (AP)–Lewis Clinch scored a career-high 30 points in his final regular-season game and Georgia Tech beat Miami 78-68 on Wednesday night to end a seven-game losing streak and snap a two-game winning streak for the Hurricanes.

Clinch, a senior playing in his final home game, made 9 of 16 3-point attempts as Georgia Tech (11-17, 2-13 Atlantic Coast Conference) took its first win since beating Wake Forest on Jan. 31.

Clinch’s high mark for 3-pointers in an ACC game this season tied the second-highest total in school history, behind Dennis Scott’s 11 against Houston on Dec. 28, 1988.

Miami (17-11, 6-9) used an 18-6 run to cut the lead to 58-51 on back-to-back baskets by Brian Asbury, who had 16 points to lead five Hurricanes in double figures. He added a career-high 15 rebounds for his first career double-double, while Dwayne Collins finished with 10 points and 15 boards to add his 14th career double-double. Jack McClinton had 13 points, James Dews added 11 and Lance Hurdle had 10 for Miami.

The Hurricanes dominated the boards, 48-26, and outscored the Yellow Jackets, 43-37, in the second half, but it wasn’t enough to overcome their slow start.