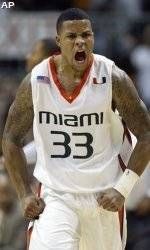 The Hurricanes made seven consecutive shots en route to a 20-5 lead, and Boston College was never closer than eight points the rest of the way.

The Eagles’ Tyrese Rice was held scoreless for the first 16 1/2 minutes and finished 3-for-15 against Miami’s zone defense. He totaled 11 points, seven below his average.

The Hurricanes (16-10 overall, 5-8 Atlantic Coast Conference) broke a three-game losing streak and swept the season series with Boston College. The Eagles (19-9, 7-6) were coming off a win over Duke last Sunday.

James Dews had 14 points and Brian Asbury recorded 12 for Miami, which shot 52 percent. Joe Trapani scored 17 for the Eagles, who shot 36 percent.

The Hurricanes have three games remaining on their regular-season slate — including just one more at home. Miami will honor its four seniors — McClinton, Asbury, Lance Hurdle and Jimmy Graham — before their regular-season finale at the BankUnited Center on Sat., March 7 versus NC State. Tickets begin as low as $10 and can be purchased by calling 1-800-GO-CANES.