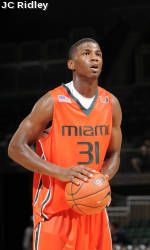 Eddie Rios added 10 points, and Lance Hurdle had eight points as the Hurricanes improved to 12-1 in their series against Florida International.

Jimmy Graham and DeQuan Jones put up four blocked shots apiece as Miami posted 13 blocks — the most since registering 16 against FAU on Nov. 29, 2004.

Michael Dominguez had 15 points and six rebounds for the Golden Panthers, who had a few hundred fans make the short drive only to be quieted by the orange-and-green clad Hurricanes’ home crowd.

Hobbled by injuries to all five starters, Florida International (4-6) was outmanned and overmatched by Miami. The Hurricanes (6-2) kept the pressure on, wearing down the Golden Panthers with an up-tempo style and holding the Golden Panthers to 30 percent shooting from the floor (16 of 53).

Rios hit a pair of 3-pointers to cap a 17-2 Miami run in the first half as the Hurricanes took the 42-26 lead into halftime.