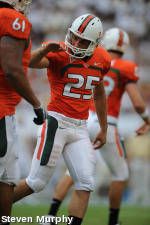 CORAL GABLES, Fla. – University of Miami sophomore kicker/punter Matt Bosher has been named a semifinalist for the Lou Groza Collegiate Place-Kicker Award given to the nation’s top kicker. Bosher is one of 20 semifinalists in contention for the award.

Bosher, who won the local Lou Groza high school Place-Kicker of the Year Award in Palm Beach County in 2004 and 2005, is 12-of-13 in field goal attempts with a career-long of 52 yards already this season for the Hurricanes. He leads the team in scoring with 64 points and has connected on two field goals of 50-plus yards.

The Lou Groza Award is sponsored by the Palm Beach County Sports Commission.

A panel that consists of coaches, other college football officials, former winners and football writers will select three finalists. The Lou Groza Collegiate Place-Kicker Award presented by the FedEx Orange Bowl will be announced on the Home Depot ESPNU College Football Awards aired on ESPN on Thurs. December 11. The three finalists will be honored at the Lou Groza Awards Banquet at the Palm Beach County Convention Center on Tues. December 9.

The award is named in honor of one of the all-time great kickers in Football history, Lou Groza. Groza played 21 seasons for the Cleveland Browns setting numerous franchise records, including most games played, most points scored and an amazing 107 consecutive games in which he scored a point. The 1,608 career points he scored is still a Browns’ franchise record, and he ranks third all-time in league. Groza was inducted into the Pro Football Hall of Fame in 1974.