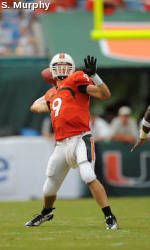 MIAMI, Fla. (AP) – Antone Smith rushed for a career-best four touchdowns, including a game-clinching 20-yarder with 3:57 remaining, and Florida State wasted most of an early 24-point lead before hanging on to beat Miami 41-39 on Saturday.

Smith – who scored three TDs last week – finished with 92 yards on 27 carries for the Seminoles (4-1, 1-1 ACC), who handed Miami its second straight home loss on a stormy afternoon. Christian Ponder ran for 144 yards, becoming the first Florida State quarterback since Charlie Ward in 1992 to run for triple-figures, and Tony Carter made two interceptions for the Seminoles.

Travis Benjamin had an 18-yard touchdown run on an end-around, caught a 51-yard TD pass from running back Graig Cooper, and finished with 274 all-purpose yards for Miami (2-3, 0-2), which has lost 12 of its last 15 conference games.

The Hurricanes trailed 24-3 at the half and 31-10 in the third quarter, then closed to within 34-32 with 8 minutes remaining. Two botched snaps on Florida State punts led to Miami points, Sean Spence ran an interception in for a touchdown and the Hurricanes seemed poised for what would have been an enormous rally.

But Smith sealed the win with a third-down run up the middle, giving coach Bobby Bowden just his 14th win in 34 games all-time against Miami.

Smith’s other scoring runs were for 2, 19 and 5 yards, part of Florida State’s 281-yard rushing day as a team.

Ponder completed 14 of 31 passes for 159 yards for Florida State, including a 15-yard score to Greg Carr, and looked at ease in his first taste of the Seminoles-Hurricanes rivalry.

Miami quarterback Robert Marve, meanwhile, was 17-of-40 for 122 yards and two interceptions.

And still, the Hurricanes nearly pulled it off.

Left tackle Jason Fox rushed for a 5-yard touchdown with 14 seconds remaining, but the onside kick was controlled by the Seminoles, as a downpour made it difficult from one sideline to see the other. Ponder knelt for the final play, and the Seminoles began leaping in celebration – knowing they just dealt their biggest league rival a huge blow.

Florida State scored the game’s first 24 points and wound up holding a 440-256 edge in total yards, largely because of Ponder’s running ability. He had nine carries for 107 yards by intermission; in the previous 13 meetings between the teams, Florida State quarterbacks ran for a combined 111 yards on 99 attempts.

The first of Carter’s interceptions set up Smith’s opening score, and the Seminoles just kept rolling. When Graham Gano connected on a 53-yard field goal, the Seminoles had a 24-0 lead with 1:07 left in the half.

Florida State tried a short kickoff after the long field goal, giving Miami possession at its own 48. The Hurricanes only got a field goal out of it on the final play of the half, but to coach Randy Shannon, that 28-yard kick by Matt Bosher was huge.

“That’s a real confidence booster,” he said, trotting off the field.

Of course, Florida State’s penchant for self-destruction didn’t hurt, either.

Smith fumbled early in the third quarter deep in Florida State territory, and Benjamin scored on the next play to give Miami some life. A high snap on a punt gave Miami a safety, Benjamin gave the Hurricanes great field position on the ensuing kickoff, and Cooper hit him with a perfect pass for a trick-play TD that drew the Hurricanes within 31-22.

Miami hadn’t had an interception return for a touchdown since 2003, but with 11:23 left, Spence – playing in place of injured linebacker Colin McCarthy – caught a deflected pass and rumbled seven yards to make the score 34-29, and Bosher got Miami within two points with a field goal three minutes later.

But the Seminoles went back to what worked – Ponder and Smith running right at Miami, to put the game away.