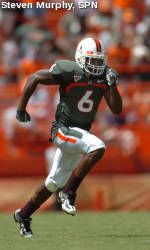 THE GAME
 Miami comes off a bye week and takes to the road for the second time this season traveling to College Station, Texas to face Texas A&M in a regionally-televised game. It will be the Hurricanes’ first trip to Kyle Field.
 The Hurricanes look to bounce back after falling to then No. 5 Florida, 26-3, on the road in “The Swamp.” Miami held Florida to nine points through the first three quarters before the Gators scored 17 points in the final 13 minutes. UM’s defense limited UF to just 89 yards rushing.
 Redshirt freshman quarterback Robert Marve will make his second collegiate start on the road against the Aggies. Marve completed 10-of-18 passes for 69 yards in his first start at Florida.
 The Hurricanes and the Aggies both enter the contest 1-1. In two games, Miami has scored 55 total points while the Aggies have put up 42 points. UM will likely be without the services of junior running back Javarris James, who suffered a high ankle sprain against Florida. Sophomore Graig Cooper has gained 53 yards on 19 carries.

THE OPPONENT
 Texas A&M also enjoyed a bye week fresh off a 28-22 win at New Mexico two Saturdays ago. Backup quarterback Jerrod Johnson completed 10-of-19 passes for 124 yards and threw three touchdown passes and the Aggie defense held off a fourth quarter rally in A&M’s first win of the season.
 Quarterback Stephen McGee has completed 68.8 percent of his passes going 22-of-32 for 190 yards in the first two games. Mike Goodson is the leading rusher with 133 yards (4.4 yards per rush) on 30 carries and two TD’s. RS Freshman receiver Ryan Tannehill has caught eight passes for 116 yards.
 Defensively, the Aggies are led by linebacker Matt Featherston with a team-high 25 tackles and defensive lineman Michael Bennett with 17 tackles.

THE SERIES
 The all-time series between the Hurricanes and the Aggies is tied, 1-1. Texas A&M won the first meeting between the two schools in 1944 with a 70-14 win in the Orange Bowl but the Hurricanes returned the favor last season with a 34-17 win on a Thursday night ESPN game in Miami on Sept. 20.

THE COACHES
 Randy Shannon is 6-8 and is in his second season at Miami. Texas A&M’s Mike Sherman is 1-1 in his first season with the Aggies.

RETURNING HOME
 Five current UM players will have a homecoming of sorts when the `Canes head to College Station, Texas this weekend. Senior OL Tyrone Byrd (Sugar Land), freshman QB/P Taylor Cook (Eagle Lake), junior OT Jason Fox (Fort Worth), sophomore RB Shawnbrey McNeal (Dallas) and senior OT Reggie Youngblood (Houston) all hail from the state of Texas and most will be playing in their first collegiate game inside the Lonestar State on Saturday. Byrd, Cook and Youngblood will be the closest to home, with Houston, Eagle Lake and Sugar Land all about 100 miles from College Station. Fox and McNeal, both from the Dallas-Fort Worth area, will be playing about 175 miles from home.

STRONG START FOR UM’s RUNNING BACKS
 The University of Miami has developed a reputation as one of the top rushing teams nationally in recent years and this year appears to be no different. Through the season’s first two games, Miami is out-rushing its opponents 285-to-138 on the ground while its top four performers in terms of all-purpose yards gained are running backs. Sophomore Graig Cooper leads the team with 134 all-purpose yards (53 – rush, 81 – punt return), followed by junior Javarris James (77 – rush, 11 – receiving), senior Derron Thomas (57 – rush, 19 receiving) and sophomore Shawnbrey McNeal (47 – rush). All four of the top gainers – Cooper, James, Thomas and McNeal – have scored a rushing touchdown this season while Cooper also has a 66-yard punt return for a touchdown.

YOUNG’S IMMEDIATE INFLUENCE
 New defensive coordinator Bill Young has the UM defense off to a strong start through the first two games in 2008. Traditionally known for having one of the most athletically talented defenses nationally, Miami appears to have regained some of its success Hurricanes’ fans have become accustomed to the last three decades. Through UM’s first two games this season, the Hurricanes rank sixth nationally in first downs allowed per game (12), 21st in rushing yards allowed per game (69.0) and 18th in total defense (235.50 ypg). The `Canes, after holding Charleston Southern to just 126 total yards of offense in the opener, shut down the fifth-ranked Gators’ ground attack in Gainesville, holding 2007 Heisman Trophy winner Tim Tebow and the UF running game to just 89 rushing yards on 27 carries (3.29 ypc). In fact, the Miami defense held a strong Gators offense to just 18.85 yards per drive on UF’s first seven drives of the contest.

DID YOU KNOW?
 Of the 23 seniors on this year’s squad, 13 have already earned degrees, while the remaining 10 are all on course to graduate either in December of 2008 or May of 2009.
 Last spring, the NCAA released its annual Academic Progress Report (APR) and the Hurricane football team scored a 969, the eighth-highest mark out of the 119 Bowl Sub-division football programs. Miami’s score – also the third-highest mark in the 12-team Atlantic Coast Conference – put the team in the 80th-90th percentile nationally based on its performance in the classroom.
 Matt Bosher’s 50-yard field goal at Florida was Miami’s first 50-yarder since Jon Peattie kicked a 55-yarder in 2006 against Virginia Tech.