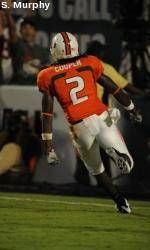 MIAMI (AP) – Graig Cooper had a 66-yard punt return for a touchdown and rushed for another score, quarterback Jacory Harris accounted for two touchdowns and Miami moved into its new home with a 52-7 season-opening win Thursday night over Charleston Southern.

Javarris James rushed 12 times for 73 yards and a touchdown for the Hurricanes (1-0), who took full control with a 21-point first quarter, their highest-scoring period since Sept. 9, 2006 against Florida A&M. Derron Thomas and Shawnbrey McNeal also had touchdown runs for Miami, which outgained its outmatched opponents from the Football Championship Subdivision 416-126.

It won’t be so easy next weekend; the Hurricanes visit No. 5 Florida on Sept. 6.

Tribble Reese threw for 81 yards, including a 2-yard touchdown pass to Tyrese Harris for Charleston Southern.

Harris was 16-for-26 for 190 yards for the Hurricanes, who didn’t score more than 37 points in any game last season and eclipsed that with ease Thursday – albeit against an opponent with just two winning seasons in its history.

So by almost any measure, Miami’s first home game in Dolphin Stadium went according to plan.

The Hurricanes ended a seven-decade stay at the decrepit, decaying – and now destroyed – Orange Bowl last season, and were lured north to the Miami Dolphins’ home field, replete with modern amenities like luxury suites, gargantuan video screens and the potential for up to $5 million in new revenue for the private school’s coffers each year.

Other than the orange-and-blue seats and baseball diamond, there was no proof that either the Dolphins or Florida Marlins played at the stadium, which drew 48,119 for the opener – roughly two-thirds its capacity.

The Dolphins’ ring of honor for the likes of Don Shula and Dan Marino was covered, Miami’s distinctive “U” logo shielded the entrance to the tunnels plus adorned the sidelines, and Hurricanes’ flags flew on all sides along the outside of the facility. The game drew 48,119.

The debut wasn’t totally flawless, at least in the logistical sense.

A long-standing Miami pregame tradition – running out of a giant inflatable helmet and onto the field – had to be scrubbed at the last minute when crews couldn’t pump enough air to make it work. The Hurricanes ran through a green plastic tunnel instead, with puffs of their trademark white smoke filling the sky.

Alas, that was the closest thing Miami had to a major problem all night.

Harris, a true freshman who started only because first-string quarterback Robert Marve was serving a one-game suspension for disciplinary reasons, opened the scoring with a 30-yard run on a fourth-down play 2:37 into the contest, and the points kept coming from there. James scored on a 7-yard run on the next possession, and Harris then hit Leonard Hankerson with a 7-yard TD pass that pushed the lead to 21-0.

Cooper scored on a 14-yard run early in the second quarter, then blew past everyone for his first career return touchdown to give Miami a 35-0 lead with 13:24 left in the third.

Reese scrambled right and made a desperate flip to Harris for Charleston Southern’s score, which capped a 10-play, 66-yard drive. Thomas answered with a 5-yard run late in the third, restoring Miami’s 35-point cushion, and McNeal capped the scoring with a 1-yard plunge with 2:33 remaining.