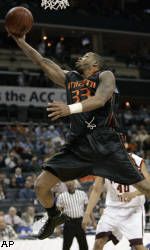 McClinton Will Return for Senior Season

“Jack is the heart and soul of this team,” said head Miami coach Frank Haith. “He is a tremendous young man with an unmatched work ethic, who has just worked incredibly hard for everything he has achieved. There is no question we are a much better team with Jack McClinton on the court, and I truly believe he is one of the most talented and dedicated players in all of Division I basketball.”

An All-ACC Third Team pick in his first season competing for the Hurricanes in 2006-07, the 6-1 guard made Miami history by earning first-team honors this season after leading the league in three-point field goals per game (2.94) and free throw percentage (.919), while ranking second in three-point field goal percentage (.427) and fifth in scoring with 17.7 points per game – including an 18.8 point average in ACC games.

McClinton helped the Hurricanes to a memorable run in the NCAA Tournament, scoring 32 of his career-high 38 points in the second half versus St. Mary’s, while finishing with 18 points – including four three-pointers – versus Texas.

McClinton, who was the only All-ACC First Team pick also named to the All-ACC Academic Men’s Basketball Team, scored in double figures 28 times in 2007-08 – including 11 games of 20-or-more points and three games of 30-plus points. With 21 points at the regular-season finale at FloridaState, he became just the 28th Hurricane to score 1,000 career points and just the fourth to do it in his first two seasons.

Despite losing five seniors from the 2007-08 team, Miami will return its top-five scorers, including McClinton and James Dews – who averaged 10.3 points per game and started 33 straight for the Hurricanes. The two guards proved lethal from anywhere on the court, converting better than 90 percent from the line and leading Miami from beyond the arc with a combined 152 three-pointers on the season.

The team will also welcome a pair of newcomers in 6-6 DeQuan Jones and 6-9 Reginald Johnson, while two current Hurricanes – Julian Gamble, a 6-9 freshman from Durham, N.C., and Cyrus McGowan, a 6-9 transfer who spent two seasons playing for Arkansas – are expected to see their first action on the court in 2008-09.