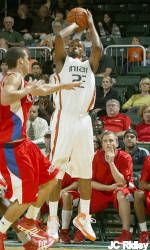 The Hurricanes opened the game on a 12-0 run, beginning with back-to-back three-pointers from Dews and Jack McClinton, who was back in the starting lineup. FIU’s Alex Galindo, who led the Golden Panthers with 14 points in the game, ended the drought by hitting a 3-pointer with 15:25 left in the half.

The Hurricanes led by as many as 25 points, taking the 54-29 lead on a Collins layup midway through the second stanza, and led by double figures throughout the final half.

Jimmy Graham finished with 10 points for Miami, grabbing six rebounds and a pair of blocks, while McClinton finished with eight points and dished out a team-high four assists. Collins and Brian Asbury grabbed a game-high nine rebounds apiece.

The Hurricanes travel to Starkville, Miss., for their second-straight road game, taking on the SEC’s Mississippi State on Thurs., Dec. 13, at 8 p.m. (EST).