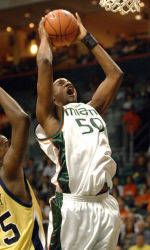 Brian Asbury’s steal and fast-break dunk with 2:30 remaining gave the Hurricanes their first lead, 52-51, since midway through the first half.

The Bears had one final possession to tie or take the lead, but the ball rolled off Coly’s leg out of bounds on a drive to the basket.

Lance Hurdle’s two-free throws with five seconds remaining clinched the victory, as the Hurricanes improved to 5-0 — their best start since winning 14 straight to open the 2001-02 season.

The Bears built a lead late in the first half, and Smith’s 3-pointer with 7:47 remaining in regulation increased Morgan State’s advantage to 48-41. But a layup from Dwayne Collins sparked a five-point Miami run, and the Hurricanes would mount another six-point run — including two baskets off steals, to take the 52-51 lead on an Asbury dunk with 2:22 to go.

James Dews, who finished with 10 points, and Eddie Rios hit 3-pointers as the Hurricanes opened the game with a 9-0 run in the first 3:46. But the Bears outscored the Hurricanes 12-2 for their first lead in the following 3:58. Smith and Reggie Holmes each scored five points during the run. Smith’s field goal with 4:43 remaining in the first half capped an 8-0 run and increased Morgan State’s advantage to 26-22.