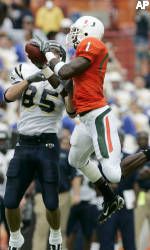 Darnell Jenkins had a career-high 108 yards receiving, Javarris James ran for 92 yards and Kenny Phillips and Chavez Grant had interceptions for Miami (2-1). The Hurricanes held a 428-264 edge in total yards, sending the Golden Panthers (0-3) to their 15th straight loss.

Wayne Younger threw a 65-yard touchdown pass to Trenard Turner midway through the final quarter and A’mod Ned rushed for 87 yards for FIU, which lost 35-0 last season to its foe from the campus 9 miles away. Michael Dominguez and Anthony Gaitor had interceptions for FIU.

Miami took control late in the third when Wright found Leggett down the right sideline for a 23-3 lead. Leggett got separation by stiff-arming FIU’s Lionell Singleton after the catch and sprinted to the end zone.

FIU got within 14 points when Younger found Turner for the Golden Panthers’ lone touchdown, but the outcome was never in doubt.

Miami missed some opportunities. The Hurricanes’ first two possessions started in FIU territory, and resulted in no points after a missed field goal and an interception by the Golden Panthers’ Anthony Gaitor.

The third possession also began on FIU’s side of the field, and Graig Cooper came through. He carried the ball on all four plays for 33 yards, the last a 3-yard run for a 7-0 lead.

Zampogna added field goals of 27 and 24 yards to send Miami into halftime with a 13-0 lead. FIU got within 10 when Chris Abed kicked a 24-yard field goal in the third, and Zampogna answered with another 27-yarder.