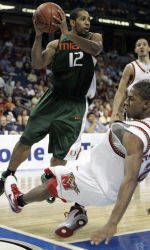 The 12th-seeded Hurricanes nearly squandered a 15-point lead in the second half, but McClinton and Asbury combined to make five consecutive free throws in the final 34 seconds to snap the Terrapins’ seven-game winning streak.

Maryland (24-7), the tournament’s fifth seed, trailed 44-29 early in the second half and chipped away at the deficit with a tenacious full-court press that forced Miami into several turnovers.

The Hurricanes (12-19) worked the clock for much of the second half and seemed content to try to hold onto the lead. It nearly backfired when James Gist’s one-handed slam made it a one-point game, 63-62.

But Asbury made four straight free throws down the stretch to seal the victory. He was 8-of-9 from the line and added seven rebounds.

Mike Jones led the Terrapins with 15 points. D.J. Strawberry added 13, and Gist finished with 12. Ekene Ibekwe had eight points, eight rebounds and four blocked shots before fouling out with 2:01 remaining.

Not only did Maryland give up too many offensive rebounds, the team struggled from the field. The Terrapins shot 39 percent from the floor and 17 percent (3-of-18) from 3-point range. They also missed 11 free throws.

Eric Hayes had a shot to tie the game with about 10 seconds to play, but his 3-pointer came up short. Greivis Vasquez got the rebound and forced up a desperation shot that missed the rim entirely.

The victory was huge for Miami, which had lost three in a row and 11 of the previous 13. Coach Frank Haith’s team has played much of the season short-handed, and the conference tournament was no different as the ‘Canes continued to play without starters Denis Clemente and Anthony King.

Clemente was suspended for the third straight game for an undisclosed violation of team rules. King, who had been the league’s top rebounder, has missed most of the season with a wrist injury.

Fabio Nass (knee) and Adrian Thomas (abdomen) also are out for the season, and combined with Raymond Hicks’ six-game suspension, Miami had been down to eight scholarship players in recent games. But Hicks returned last week against Florida State.