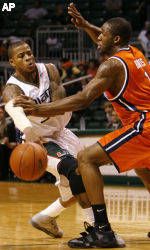 McClinton hit two three pointers in the final 1:06 to lift Miami to a 68-60 victory over No. 24 Virginia Wednesday night.

“I just had the open look and let it go at the end,” said McClinton, who led Miami with 14 points.

Brian Asbury secured the victory with four free throws in the final 15 seconds and Miami improved to 11-16 and 4-9 in the Atlantic Coast Conference.

Asbury, Anthony Harris and Dwayne Collins each finished with 11 points, and Collins had 12 of his 14 rebounds in the second half.

“We came together as a team tonight,” Collins said. “We showed tonight that other teams have to worry about us next year and the rest of this year.”

“We needed something like this to get us back on our heels,” McClinton said. “We’re not giving up.”

Miami also avenged an 81-70 loss at Virginia on Feb. 3. The Cavaliers won nine of 10 before Wednesday’s game.

“Since the game at Virginia, we’ve learned a lot,” Miami coach Frank Haith said. “Tonight we made the plays and we need to carry the momentum from tonight.”

Harris’ running jumper with 7:51 to play put Miami ahead 53-51 for its first lead since the first minute of the game.

The Hurricanes, who twice had 12-point deficits in the first half, tied it at 49 on Harris’ 3-pointer with 9:31 remaining in the second half.

“We feel great about the victory, we played outstanding defense in the second half,” Haith said. “Jack’s two big 3’s late were huge.”

The Cavaliers ran off seven straight points in a 1:30 span late in the first half to build a 30-18 lead.

But Virginia was limited to 25 in the second half.

“I never felt, during the course of the game, comfortable how we did offensively,” Virginia coach Dave Leitao said. “Miami had the edge, especially in the second half, on how they approached the game mentally.”