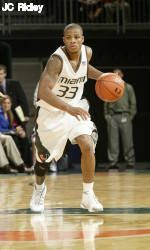 CORAL GABLES, Fla. (AP) – Jack McClinton scored 23 points to lead Miami past Lafayette 98-66 on Saturday. McClinton made four 3-pointers and hit 7-of-11 shots from the floor. It was his fourth 20-point game of the season.

Brian Asbury added a career-high 19 points for Miami on 8-of-12 shooting. Asbury also had three blocks and three steals. Miami (4-2) went on a 12-0 run in the first half and led 60-40 into halftime. They led by as many as 34 points in the closing minutes of the game.

Denis Clemente and Raymond Hicks also scored in double figures for the Hurricanes, scoring 12 and 11 points respectively off the bench. The Hurricanes converted 20-of-24 from the free-throw line and out-rebounded the Leopards 42-28.