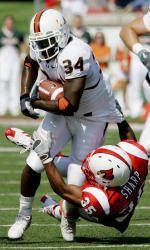 LOUISVILLE, Ky. (AP) -Louisville came up with one of its biggest victories even though it lost Heisman hopeful Brian Brohm to a hand injury.

Brohm threw for 181 yards and a touchdown to lead the 12th-ranked Cardinals to a 31-7 victory over No. 17 Miami on Saturday before getting knocked out of the game.

Backup quarterback Hunter Cantwell threw for 113 yards and a touchdown after Brohm went out with sprained ligaments in his right (throwing) hand.

The Cardinals had already lost one Heisman Trophy contender for the season, when running back Michael Bush broke his leg in the season opener.

But the injuries didn’t keep the Cardinals from getting the signature win they’ve been searching for under coach Bobby Petrino.

Kolby Smith, one a committee of back replacing Bush, ran for two touchdowns as Louisville (3-0) beat a ranked opponent from a Bowl Championship Series conference for the first time since 2002.

Miami quarterback Kyle Wright threw for 278 yards, but spent most of the second half running from a fierce Louisville pass rush that sacked him several times and harassed him countless others.

The Cardinals rallied from an early deficit to take a 10-7 lead at the half on a 56-yard touchdown pass from Brohm to Mario Urrutia. They were marching again on their first drive of the third quarter when Brohm fell on his hand while scrambling away from pressure.

He came up holding his hand, and was replaced by Cantwell, who started two games for the Cardinals last season after Brohm injured his right knee in a win over Syracuse last November.

If Cantwell was nervous, he didn’t show it. Smith scored on a 4-yard run two plays after Cantwell entered the game. On the next possession, Cantwell stepped up and threw a 45-yard strike to Harry Douglass, with Brohm cheering from the sideline, waving a towel with his left hand and wearing an ice pack on his right.

Brohm will have an MRI on Sunday after completing 10-of-14 passes. Brohm will likely be out for a while, though how long was not immediately known.

Cantwell and Louisville’s defense made sure neither were missed too much in the second half. Two plays after the pass to Douglass, Smith bulled over from the one and the Cardinals had a 24-7 lead, the same advantage they had over Miami two years ago and over West Virginia last year. Both times, the Cardinals let the game slip away.

Not Saturday, as Louisville’s defense dominated a punchless Miami offense that took just one snap on Louisville’s side of the field in the second half until the game’s final minute.

Miami came out fast, battering Brohm on Louisville’s first two drives – sacking him twice and knocking him down on two other occasions.

Miami took the lead on a 1-yard run by Tyrone Moss and had a chance to extend it after Louisville running back George Stripling fumbled deep in Cardinal territory. But Miami running back Charles Jones fumbled at the Louisville 8, and the Cardinals responded with a 10-play, 87-yard drive that ended with a 22-yard field goal.

Urrutia’s touchdown gave the Cardinals the lead, and the Cardinals held onto it at the half after Miami kicker Jon Peattie missed wide left.