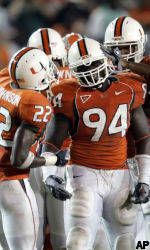 Radio En Espanol: The game will broadcast in Spanish on WRCH 1550 AM with Joe Pujala (play byplay) and Joe Martinez (analysis).

The University of Miami needs to make a statement, and there’s no better time than on Saturday inGame Three of the 2006 season. The Hurricanes will make their first road trip of the year when theyface the Louisville Cardinals at 3:30 p.m. Saturday at Papa John’s Cardinal Stadium in Louisville. Miamiis 1-1 this season, with a loss to Florida State and a victory over Florida A&M. Louisville is 2-0, withwins over Kentucky and Temple.

“If we go out and win a game like this on the road, it’s a huge statement,” said Hurricanes head coachLarry Coker. “Louisville does not lose many games at home. They may be the best offense we face allseason. It’s a tremendous challenge, but our players were already excited about this right right after theFAMU game.”

The Hurricanes have never lost to Louisville, having won nine of the 10 games in the series, with onetie. The two schools last met in 2004, when Miami came back from a 24-7 halftime deficit to win 41-38at the Orange Bowl. In that game, Miami scored on all six second-half drives to win one of college football’smost exciting games of the season. The series began in 1933, and the one tie was in 1950.

The Hurricanes have lost only one game in the state of Kentucky, and that was back in 1951 to theUniversity of Kentucky. However, Louisville is a formidible opponent at home, having won 17 of its last18 games at Papa John’s Cardinal Stadium. The Hurricanes have won four straight games at theiropponent’s stadium.

The game should be a battle of Louisville’s powerful offense against Miami’s perennially sturdydefense. In this still young season, the Cardinals rank No. 1 in total offense and scoring offense, No. 3in rushing and No. 6 in passing. The Hurricanes rank seventh in total defense, ninth in rush defenseand 32nd in pass defense. Miami led the nation in pass defense three of the past four seasons.The Miami offense got untracked last week against Florida A&M, rushing for 339 yards and gaining563 yards on offense. Four backs rushed for more than 60 yards. Starter Charlie Jones ran for 62 yardsand two touchdowns; freshman Javarris James rushed for 75 yards and scored twice, once on a 21-yard reception; Tyrone Moss returned after missing 10 months with a torn ACL and rushed for 64 yardsand score one touchdown; and reserve Derron Thomas led all runners with 109 yards. QuarterbackKyle Wright had one of his most efficient games, leading the team to touchdowns on all five drives thathe led. Wright completed 13 of 18 passes for 166 yards and a touchdown.

Louisville also has a host of running backs, even though it lost Heisman Trophy candidate MichaelBush to a knee injury in the season opener. Kolby Smith and George Stripling have already rushed for162 and 152 yards, respectively. But Louisville’s star is quarterback Brian Brohme, who ranks 15th inthe nation in total offense and has 561 yards passing in two games.

The Hurricanes moved up to 15th in this week’s coaches poll and remained 17th in the AP poll.Louisville is ranked 12th by the coaches and AP.