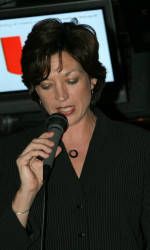 On the one-year anniversary of the appointment of Katie Meier as the head coach at the University of Miami, the Hurricane women’s basketball program held it’s annual postseason awards banquet to commemorate the accomplishments of the 2005-06 season Wednesday night at Monty’s in Coconut Grove.<?xml:namespace prefix=”o” ns=”urn:schemas-microsoft-com:office:office”?>

Emceed by Jay Rokech, the evening included a buffet dinner while honoring the players, coaches, support staff and fans that made the season, which saw Meier and the Hurricanes advance to the second round of the WNIT behind a 17-13 overall record and a sixth-place finish in the ACC standings, a success.

Following an introduction of the UM coaching and support staff, Meier presented Lois Kerr and Beth Gopman awards on behalf of the program for all the hard work and support the two have shown over the past season.

After a reflection of the 2005-06 season, which included a season highlight video put together by team video coordinator Laz Fernandez, Meier began the awards presentations by recognizing this seasons team captains – seniors Katie Hayek, Melissa Knight and Tamara James.

Audibert was presented with the Community Service Award for being the first to volunteer to help out in the community while strength and conditioning coach Andrew Klich handed out the Strongest Player Award to Marincic.

Next came the Dish Award, given to junior Renee Taylor who led the team with 115 assists, followed bye the Rebounding Award, presented to Tamara James who pulled down an average of 7.8 boards per game this season.

Meier then presented Hayek with the Coaches Award, given to the player with a great attitude who could always be counted on to be there for teammates and coaches.

The team’s Most Improved award was given to sophomore Lamese James, who went from averaging less than one minute per game a year ago to becoming a full-time starter this season, averaging 8.2 points and 6.0 rebounds over the last nine games.

The MIPP award was presented to Tamara James for her hard work day-in and day-out in practice while <?xml:namespace prefix=”st1″ ns=”urn:schemas-microsoft-com:office:smarttags”?>Taylor received the MIP trophy for her commitment to play in both practice and on gameday.

Following the individual awards presentation, Meier recognized each member of the senior class – Tatjana Marincic, Katie Hayek, Melissa Knight and Tamara James – and presented each with a framed jersey.

The evening ended with closing remarks from the senior class, Meier, Rokech and an impromptu moment from Lamese James, thanking everyone for making the season a success.