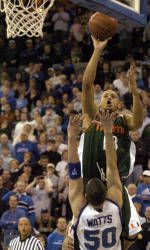 Miami will travel to face Michigan on Wednesday night in Ann Arbor. The game will be on ESPNU and will tip-off at 8:00pm.

Tickets are available and start as low as $8. Fans can order their tickets or receive more information by visiting mgoblue.com or calling 866-296-6849.

OMAHA, Neb. (AP) – Guillermo Diaz made a free throw with 2.6 seconds left and Miami beat Creighton 53-52 Monday night in the second round of the NIT.

The score was tied at 52 when Diaz drove past Nick Porter and ran into Dane Watts while attempting the potential winning shot. Creighton coach Dana Altman screamed for a charging call, but Watts was called for the foul and Diaz made the second of two free throws.

On the game’s final play, Johnny Mathies collided with Diaz as he tried to get off a last-second 3-pointer. There was no call and the referees ran off the court as fans threw objects onto the floor and Altman ran onto the court to protest.

Robert Hite scored 16 points to lead Miami (18-15), which will play Wednesday at Michigan in the quarterfinals. Creighton finished 20-10.

Anthony King had 14 points and Diaz finished with 12 for the Hurricanes.

Mathies had 18 points and Jimmy Motz 12 for the Bluejays (20-10), who didn’t lead until there was less than three minutes to play.

Miami led 46-34 after Hite’s fourth 3-pointer, but Creighton used a 13-2 run to get within a point. Motz and Mathies hit 3-pointers and Tolliver converted a three-point play to spark the rally and get the 10,018 fans into a frenzy.

Mathies drove the lane and tied the game with a layup and was fouled. But he missed the free throw with 29 seconds left.

Hite scored 11 points while hitting three 3-pointers in the first half. He finished with four to set the school’s single-season record with 83.