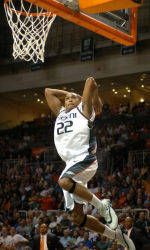 The Hurricanes (4-1) began to pull away in the first half when they extended their lead to 19 thanks in large part to Hite connecting on his first four shots from three-point range. The Hurricanes also benefited from a season-high 19 assists as 10 players contributed to the scoring.

“I thought we played well. I was real pleased with our energy,” head coach Frank Haith said. “I thought our defensive intensity was good.

“We really shared the basketball tonight. If our guys continue to understand the difference between a good shot and a great shot, and make the extra pass, we’re going to be a good ball club.”

The Hurricanes shot 48.4 percent from the field and were led defensively by 2004-05 first-team All-ACC defender Anthony King who tied freshman Jimmy Graham with a game-high seven rebounds, while adding four blocks.

Haith also continued to get his four freshmen minutes, as Graham (eight points) and guard Denis Clemente (six points) were in the starting lineup, while forwards Brian Asbury and Adrian Thomas logged 14 and seven minutes respectively.

Next up for the Hurricanes are the Temple Owls (1-1) this Sunday at 1 p.m. in Philadelphia. The game will be broadcast by FOX Sports Net Florida.