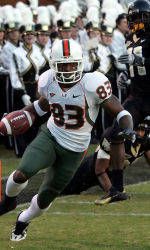 A week after a surprisingly easy victory at Virginia Tech, the Hurricanes (8-1, 5-1 ACC) used a quick-strike offense to avoid a letdown in their first visit to Groves Stadium since 1971. Injured tailback Tyrone Moss (torn ACL) and return star Devin Hester (hamstring strain) hardly were missed as Miami piled up 515 yards of offense.

Wright finished 17-for-27 for 319 yards and Jones rushed for 90 more, but it wasn’t quite as easy as the final margin indicated. The Demon Deacons (4-7, 3-5) completed their third straight losing season with an inspired effort, taking a 17-14 lead late in the second quarter on a 7-yard run by Chris Barclay.

Wright responded on the third play of the ensuing possession with his first TD toss, waiting patiently in the pocket for Sinorice Moss to break open in the middle of Wake Forest’s zone. The pass led Moss perfectly and he outran the secondary untouched for a 64-yard score to give the Hurricanes the lead for good, even though Jon Peattie’s extra-point bounced off the left upright.

An interception by Kelly Jennings – the first of six turnovers for the Deacons – set up Miami again, and Wright needed four plays to drive his team 28 yards. A wide receiver screen to Darnell Jenkins covered the final 11 and made it 27-17.

Barclay fumbled on the first play following the kickoff and Wright connected with Ryan Moore for a 15-yard touchdown to complete the scoring binge, giving the Hurricanes a 34-17 halftime lead. Each of those three scoring drives took less than 60 seconds.

The third quarter was more of the same. Wright completely fooled Wake Forest by faking a screen to Jenkins, and Lance Leggett got behind the defense to haul in another beautiful pass for a 76-yard score. Wright got his fifth TD pass with a 10-yarder to tight end Greg Olsen, tying the mark set by Ken Dorsey, Steve Walsh, Bernie Kosar and Brock Berlin.

Wright left for good with 11 minutes remaining, allowing backup Kirby Freeman to finish out the blowout. Miami needs to beat Georgia Tech and Virginia to set up a rematch with Florida State in the ACC title game, and both of those remaining regular-season games are in the Orange Bowl.

The Deacons again won’t have a postseason, but there were a couple of highlights in the lopsided loss. Despite two fumbles, Barclay became only the third player in conference history to rush for 4,000 yards and 40 touchdowns in a career. He had 105 yards against the top-ranked defense in the country and will lead the ACC in rushing for the third straight season.

And punter Ryan Plackemeier cemented his spot as the NCAA’s all-time leader by averaging 46 yards on five kicks, including a 62-yarder in the third quarter. That was his 13th of the season of at least 60 yards.