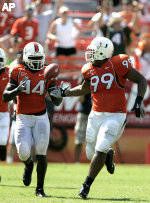 South Florida Up Next For Hurricanes

National Radio: XM Satellite Radio will carry the game live.Radio En Espanol: The game will broadcast in Spanish on WWFE 670 AM with Roly Martin (play byplay) and Joe Martinez (analysis).

The Miami Hurricanes will play the second of three consecutive games in the Orange Bowl when theyhost the University of South Florida at 8:00 p.m. Saturday. It will be the first meeting ever between thetwo schools. The Hurricanes are 2-1 and have won two straight games to move up to ninth in the APpoll. South Florida, meanwhile, is 3-1 and is coming off a surprising 45-14 victory over Louisville, whichwas ranked ninth going into the game.

South Florida lost its opener to Penn State and has since defeated Florida A&M, Central Florida andLouisville. In eight seasons since starting its football program, the Tampa-based university has won 58of 92 games (.630). The Bulls average 31.5 points per game this season behind the 10th-ranked rushingoffense in the country. RB Andre Hall averages 117 yards per game.The Hurricanes have scored in all eight quarters in their two victories behind an offense that ranks68th nationally in rushing, 59th in passing and 77th overall. Defensively, the Hurricanes rank 25th in thecountry. UM ranks seventh in defensive passing efficiency and 27th in run defense. SS BrandonMeriweather is turning into a force on defense. In three games, Meriweather leads the team with 30tackles.

This is Miami’s second of three non-conference games in a four-week period. After next week’s gameagainst Duke, UM plays at Temple on October 15 before finishing the regular season with five straightgames against ACC foes. The Hurricanes have not lost to a non-conference opponent since Tennesseeon Nov. 8, 2003.

The Hurricanes have been ranked in the AP poll longer than any team in the country, 93 consecutiveweeks dating back to Dec. 4, 1999. They began this season ranked eighth, fell to 14th after losing theopener at Florida State, and have moved steadily back up over the past three weeks. They are alsoranked ninth in the first Harris poll.

Miami has played 146 teams in its 80 seasons of football, making South Florida opponent No. 147 in thefirst meeting between the two schools on Saturday night in the Orange Bowl. The Hurricanes are 88-56-2(.610) all-time in first-ever meetings with their opponents, including five straight wins in inaugural meetingswith teams. Since 1991, the Hurricanes are 10-1 in their first meetings with schools and have outscoredthose 11 opponents by an average of 41-11. UM’s last loss in its first game against a school was a 38-20loss to Washington in 1994.