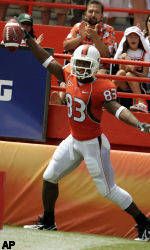 MIAMI (AP)– Kyle Wright threw for 264 yards and a touchdown, plus ran for another, and No. 12 Miami’s defense frustrated Colorado all afternoon in the Hurricanes’ 23-3 win Saturday.

Only Mason Crosby’s 58-yard field goal – the second longest of his career – with 11:57 left kept the Buffaloes (2-1) from being shut out for the first time in nearly two decades.

Sinorice Moss had 111 yards receiving, including a 53-yard touchdown catch, for the Hurricanes (2-1) who got three field goals from Jon Peattie, then a 2-yard scoring run by Wright with 8:44 left.

“Once you get a couple positive plays, the offense really gets in a rhythm,” Wright said. “Today, with the University of Colorado down here, we wanted to get them huffin’ and puffin’ and runnin’ in that nice hot, humid weather we had out there. Our guys felt great, and you could see they were subbing in and out.”

Quadtrine Hill and Tyrone Moss combined for 99 yards rushing for Miami, which got 12 tackles and an interception from safety Brandon Meriweather, plus another interception from Marcus Maxey. The Hurricanes nearly added a defensive touchdown with 1:30 left when Kareem Brown recovered a fumble and lateraled to Leon Williams, who scored – but the play was called back by a penalty.

No matter. By then, the outcome was long decided.

Joel Klatt – bothered all day by a foot injury – completed 25 of 41 passes for 228 yards for Colorado, which got 82 yards rushing from Hugh Charles.

Colorado hasn’t been shut out since Nov. 7, 1988, against Nebraska – 200 games ago. That streak survived, but the Buffaloes, who hoped a win could spring them back into the national rankings, were stymied otherwise.

The kickoff temperature was 86 degrees, with 70 percent humidity making it feel like 95 – and it got hotter. Conditions were quite difficult and unusual for Colorado; they’re already snowmaking at a resort 56 miles from the Buffs’ campus, and the team tried to replicate South Florida’s steamy feel by cranking the heat for weight-room workouts over the past several weeks.

It didn’t help. The Buffaloes were 5-for-18 on third-down chances, collected a good chunk of their 331 yards in the fourth quarter with many Miami starters resting, and were penalized 16 times for 104 yards.

Miami went three-and-out on its first possession and Colorado quickly moved to the Miami 7, but came up empty. One stuffed run and two incompletions preceded Crosby pushing a 28-yard field goal try wide right – the first miss inside 40 yards of his Colorado career; he was 18-for-18.

It was the Buffs’ best chance to score in the opening half.

Peattie opened the scoring with a 34-yard field goal midway through the first quarter, and Maxey’s interception helped double the lead; it set up a 20-yard field goal by Peattie 11:12 before halftime.

Colorado went three-and-out on its next possession, and Miami pounced shortly afterward when Wright hit Sinorice Moss with a long scoring strike down the right sideline.

Wright never was sacked, after 14 sacks in Miami’s first two games. He completed 20 of 39 passes before being replaced late by Kirby Freeman.