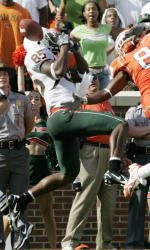 Moss bounced out to the right side for his scoring run and safety Kenny Phillips intercepted Charlie Whitehurst when the Tigers (2-1, 1-1 Atlantic Coast Conference) got their chance in the third extra period.

Phillips’ play ended the game and gave the Hurricanes (1-1, 1-1) a reason to forget their miserable 10-7 loss at Florida State nearly two weeks ago.

Moss finished 139 yards rushing and three touchdowns, two in overtime. His 1-yard touchdown in the fourth quarter put Miami up 20-10, while his 3-yard scoring run gave the Hurricanes a brief 27-20 lead in the first overtime.

It was Clemson’s first OT defeat after coming in 5-0, including a 24-17 victory at the Orange Bowl over Miami a year ago.

Miami seemed like it would have its Death Valley revenge after Moss’ first score with 14:20 left in the game.

But the Tigers (2-1, 1-1), who have already rallied in the fourth quarter to beat Texas A&M and Maryland this season, did it again to force overtime.

Whitehurst had a 1-yard quarterback sneak touchdown to cut the lead to three points with 2:58 to go. Then after forcing the Hurricanes to punt, Whitehurst led a 46-yard drive that ended with Jad Dean’s tying field goal from 27-yards out.

Miami was fortunate to get the tie. On third-and-10 with 19 seconds remaining, Clemson receiver Chansi Stuckey was by himself on the left side of the end zone. But Whitehurst badly overthrew him.

The Hurricanes didn’t look particularly crisp in their first trip to Clemson, but got rolling when they went to Moss on the ground instead of sophomore Kyle Wright’s passing.

Trailing 10-6 in the third quarter, Moss carried six times on a 47-yard drive that ended with Wright’s 8-yard touchdown pass to Quadtrine Hill.

On the next series, Wright let loose with his longest pass of the game, a 40-yard strike to Sinorice Moss that move Miami to Clemson’s 6.

Two plays later, Tyrone Moss finished the drive with his 1-yard score to give Miami its 10-point, fourth-quarter lead.

Clemson hoped for its first 3-0 start since 2000. Things looked good early on as the Tigers continually rattled Wright (they registered five sacks) and even used a little Bowden-family trickery to take the lead.

Whitehurst faked a handoff and ran around left end untouched for 65 yards to Miami’s 8. The gain surpassed the 61 yards rushing the fifth-year senior had managed in his career to this point.

Whitehurst did what he’s better known for on the next play, hitting tight end Cole Downer with an 8-yard touchdown pass to put the Tigers up 7-3.

When Jad Dean hit his 12th straight field goal, Clemson was up 10-3 in the second quarter.

For Wright, his offensive struggles continued at Death Valley.

Four drives ended in punts and Wright was sacked three times in the opening half. The times Wright got the Hurricanes close enough to threaten, they could not get past the Tigers defense.