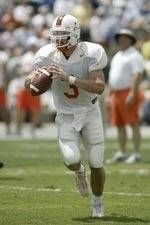 Coral Gables, Fla. – Hundreds of fans and dozens of media huddled together at the Greentree Practice Fields Saturday morning to watch the Miami Hurricanes scrimmage in their last open practice of the 2005 preseason. The scrimmage got off to a slow start with a 23-minute weather delay after warm-ups. Fortunately, the action that followed on the field proved to be well worth the wait.

“This was a good start for us,” head coach Larry Coker said. “We saw some glances of great things on defense and some great things on offense. We have to keep pushing and keep building. If we do that, I think we’ll have a chance to have a good team.”

The 60-plus plays run in the scrimmage offered a bit of everything from both sides of the ball. There were long completions in the face of blitzes, like a 50-yard bomb to Lance Leggett from Kirby Freeman and Freeman’s 63-yard hook-up for a TD to Aikeem Jolla. Veteran defensive linemen Orien Harris and Thomas Carroll harassed quarterbacks and played second fiddle only to Bryan Pata’s two sacks from the left side of the line. Miami’s running offense and defense traded shots, with the line creating holes for Tyrone Moss and Derron Thomas to bounce outside. Other times linebackers Jon Beason, Darryl Sharpton, Spencer Adkins and Romeo Davis filled holes and stopped backs for losses. Cornerback Kelly Jennings jumped a short route covering Ryan Moore and picked off Kyle Wright’s pass with nothing but green in front of him.

UM’s first-team offense, led by quarterback Kyle Wright was stopped after its first six plays by the starting defense, but it advanced 50 yards over its next four plays on a nice 20-yard run to the outside by Tyrone Moss and a pair of 15-yard completions to Quadtrine Hill and tight end Greg Olsen.

Freeman hit Leggett for a 50-yard score against the second unit, launching an arcing ball in the face of a corner blitz. The play was set up by a 22-yard inside-out run by Thomas.

The big runs by Miami’s running backs within the first 20 plays might have resolved the question of what the UM backfield will offer this season. “Tyrone (Moss) and Derron both made some nice plays,” Coker said. “Charlie Jones also made some 4- and 5-yard runs. From what I saw at running back, I think we’re going to be fine there. Derron is 197 pounds now and he came in at 183. He had a great summer. He is stronger. He has great speed and quickness with great vision. He can make people miss.”

Saturday’s scrimmage was the heaviest action some of the younger Hurricanes have seen in their first UM camp. Coker was adamant about the contributing role some freshmen may have. “No doubt about it,” Coker said. “I saw some excellent play out of our young linebackers, and those guys will have some opportunity to play. Some may play quite a bit.”

Coker specifically mentioned the play of freshmen linebackers Sharpton and Adkins, who both made possibly the biggest hits of the day on inside runs. Perhaps most important was that no serious injuries came out of the scrimmage. Coker was also pleased with the enthusiasm and enjoyment his players expressed. “They are having fun and I like that,” Coker said. “I’ve seen offenses where I’m the only one to congratulate them after they score. Our whole team spontaneously did that today. We had a lot of energy from our defense and I think our defense got more energy as the day went on.”

The Hurricanes will need to bottle up some of that energy throughout the rest of the afternoon and Sunday. UM returns to the Greentree Practice Fields on Monday for a pair of practices at 8:30 a.m. and 3:30 p.m.