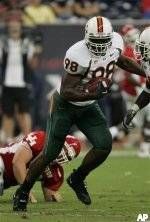 HOUSTON (AP) – Tyrone Moss rushed for 148 yards and two touchdowns, TavaresGooden recovered a blocked punt in the end zone for a score and Baraka Atkinsscored on a 58-yard fumble return to lead No. 4 Miami to a 38-13victory over Houston on Thursday night.

Moss’ best rushing performance of his short career and the Hurricanes’opportunistic defense and special teams offset a particularly erraticperformance by quarterback Brock Berlin.

Berlin finished 13-of-23 for 99 yards but was sacked seven times.

Miami also allowed its first offensive touchdown of the season: Kevin Kolb’s6-yard scamper into the end zone in the final moments of the first half. TheCougars’ sideline erupted in celebration, with a few players tossing theirhelmets into the air.

Houston tailback Anthony Evans, who rushed for 282 yards against Army lastweek, missed the game after straining his right calf during pregame warmups. Hewatched from the sidelines in his uniform, leaning on crutches with a boot onhis leg.

Predictably enough, Houston got off to a rough start without him.

The Cougars (1-3) barely got their first play off on time, dropped a pass onthe third play, committed a false-start penalty on the next and were nearlyintercepted on third down. Gooden scored on Anthony Reddick’s blocked punt onfourth down, 55 seconds into the game.

Frank Gore and Moss, a sophomore, added a couple of short scoring runs togive Miami a 21-0 lead early in the second quarter.

Houston, playing its fourth game in 19 days, made Miami work a little harderthan it expected in its first visit to Texas in seven years.

The Cougars failed to score on several chances deep in Miami territory. TheCougars drove inside Miami’s 20 five times, and came away only with Kolb’stouchdown run and two field goals.

Ryan Gilbert, a transfer from LSU, proved to be an adequate replacement forEvans. He rushed for a career-high 84 yards on 26 carries. Kolb was 11-of-28for 156 yards.

This was the first meeting between the teams since Miami routed DavidKlinger and the Cougars 40-10 in 1991 at the Orange Bowl. It remains ESPN’shighest-rated Thursday night game.