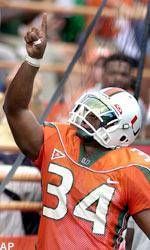 MIAMI – Jarrett Payton waited five years and 57 games for this.

Payton, the son of late Hall of Fame running back Walter Payton, had his first 100-yard game Saturday against Temple.

He carried 16 times for 115 yards and scored twice as No. 2 Miami routed Temple 52-14, dominating the Owls for the 12th consecutive time.

The Hurricanes (7-0, 3-0 Big East) extended the nation’s longest home winning streak to 26 games. They also won their 39th straight regular-season game and 27th in a row in the Big East – streaks that could be tested at No. 3 Virginia Tech in two weeks.

Payton had a lot to do with the latest one-sided affair.

“I’m very happy for that young man,” said Temple coach Bobby Wallace, who grew up with Walter Payton in Jackson, Miss., and occasionally played softball with the Chicago Bears legend. “I know what a quality individual his father was, and I’m sure he’s the same type of person.

“I’m happy he’s getting his chance.”

Making his first career start last week against Florida State, Payton gained 97 yards in the rain. He looked even better on a dry field – and against Temple.

But then he gave the team a small scare.

After his fifth touchdown of the season, Payton fell to the ground on the sideline – feeling dizzy and lightheaded. Team trainers took his blood pressure and checked his heart rate before treating him for low blood sugar.

Payton drank some water, ate an energy bar and sat out the next three series.

“It wasn’t a big deal,” Payton said. “I just didn’t eat as much this morning as I usually do. I thought I could get away with two bowls of cereal, but I couldn’t. Once I got something in my system I got better.”

He returned just before the first half and eclipsed the 100-yard mark on the first series of the second half.

He sat out the fourth quarter as Miami’s backups took over. By then, the game was well in hand.

Payton turned to freshman tailback Tyrone Moss on the sideline and said, “If you don’t score today something’s wrong.”

Moss ran 15 times for 135 yards, most of it coming in the fourth quarter on a hot day against a drained Temple squad. It was the first time the Hurricanes had two 100-yard rushers since Clinton Portis (132) and Gore (153) did it against Syracuse in 2001.

The Hurricanes finished with 342 yards rushing and 259 passing, eclipsing 600 yards in total offense for the first time since 2001.

Brock Berlin completed 16 of 26 passes for 187 yards and threw two touchdown passes – his first game without an interception this season.

“He’s improved every week,” offensive coordinator Rob Chudzinski said. “Despite some public opinion on that, you see it every week. He’s more and more confident with his reads. He’s not forcing balls and taking what the defense gives us. He manages our football team. I really see improvement in his game.”

Berlin found Jason Geathers in the flat for a 15-yard score that made it 24-14 before halftime.

On the opening drive of the third quarter, linebacker D.J. Williams ran 61 yards on a fake punt. He took a direct snap on fourth-and-1, ran up the middle and then leaped over punt returner Zamir Cobb at the 25 before going untouched the rest of the way.

“We never slowed them down offensively all game long,” Wallace said. “We were hanging by a thread and the fake punt broke the thread.”

Temple, which entered the game with the Big East’s top passing offense at 274 yards per game, was held to 21 yards through the air.

“We were overpowered by a very good football team, simple as that,” Wallace said.