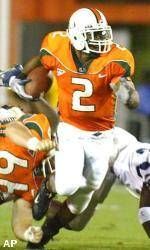 MIAMI – No. 1 Miami doesn’t expect the next game to be this easy.

Next up: No. 11 Florida State – the team the Hurricanes call their annual “measuring stick.”

“It’s always a different breed when they come here to come play us,” center Brett Romberg said. “They’ll want to fight. They turn it up for us and we do the same for them.”

Miami has won two straight in the series, and after losing to Louisville and struggling against Iowa State and Clemson, the real question is: Are the Seminoles ready for the Hurricanes?

Miami (5-0) scored on five of its six first-half possessions and added a defensive touchdown. Then they took the opening kickoff of the second half 86 yards for another score and a 48-0 lead over the overmatched Huskies (2-4).

Dorsey, McGahee and many other starters got the rest of the night off. It was a well-deserved break.

“What are you going to say? That’s the No. 1 team in the country, far and away,” UConn coach Bill Edsell said. “I think they’ll run the table again and be the national champion.”

Dorsey completed 19 of 26 passes for 216 yards. The three TD passes gave him 14 this season and 79 for his career. He also threw his fifth interception, the lone time the offense stalled in the first half.

The defense did its part, too. Defensive tackle Vince Wilfork sacked Dan Orlovsky and caused a fumble. Andrew Williams picked it up and ran 56 yards for his first career touchdown.

Dorsey’s interception came on Miami’s next possession. But like he’s done so many other times in his career, Dorsey bounced back and threw two TD passes before halftime.

The senior quarterback looked sharper than ever this season, avoiding pressure, finding open receivers and throwing perfect passes. He hit Kevin Beard twice for touchdowns before the half, then found Ethenic Sands for an 8-yard score to before calling it a night.

“I like to think we have a pretty good football team,” Dorsey said. “We played the way we wanted to play, and we kind of put it all together in this game.”

Dorsey was flagged for taunting on the third touchdown pass, and the Hurricanes missed a long extra point – one of their few miscues.

UConn, a 44-point underdog playing its first season in Division I-A, had trouble moving the ball and an even tougher time slowing down the Hurricanes.

It was a glimpse of what the Huskies will face when they join the Big East in 2005.

The ‘Canes finished with 498 yards. UConn managed 190 yards, much of it in the second half against Miami’s reserves and with the game out of reach.

Orlovsky hit tight end Tommy Collins for a 14-yard touchdown just before the end of the third quarter. Then on Miami’s ensuing possession, the Huskies blocked a punt and Ezra Carey returned it 5 yards for a score.

“We felt coming in that we could block a punt, but it just took us that long to get them in a punting situation,” Edsell said.

Terry Caulley, UConn’s leading rusher with 446 yards and a 5.1-yard-per-carry average, missed the game because of back spasms. The 5-foot-7 Caulley had rushed for more than 100 yards in the last three games.

“Obviously the level of play next Saturday will be much higher,” Miami coach Larry Coker said. “There’s no doubt about it – Florida State, Connecticut, it’s a different ballgame.”