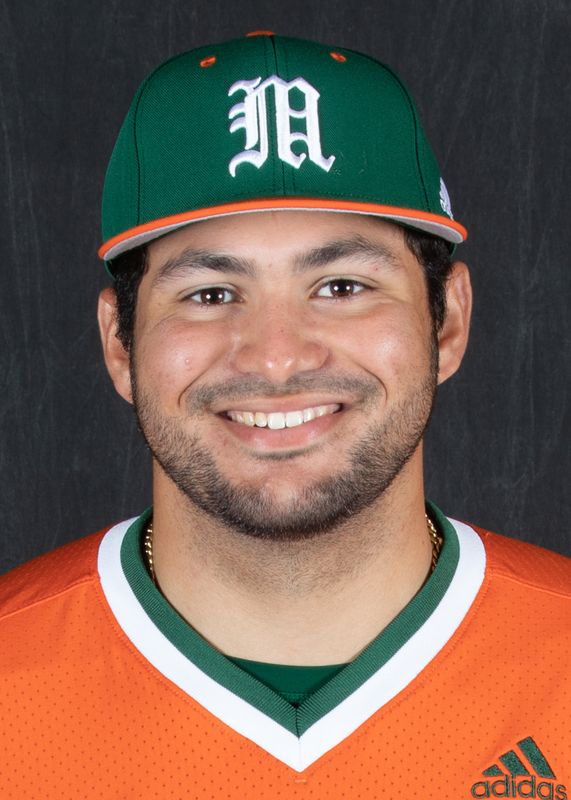 *Junior (2021): Made 47 appearances, including 39 starts, primarily as Miami’s designated hitter…Batted .292 with six doubles, eight homers and 29 RBI…Ranked second on the team with a .511 slugging percentage and posted an .894 OPS…Had third-highest batting average on team among qualifiers…Had 11 multi-hit games and five multi-RBI performances…Ended season on a 14-game on-base streak…Had game-winning hit in 11-inning victory at preseason No. 1 Florida (Feb. 20)…Homered to help Miami clinch series at preseason No. 1 Florida (Feb. 21)…Had two doubles and an RBI in win at FAU (Mar. 23)…Went 2-for-4 with an RBI in win at Virginia (Mar. 26)… Had two hits and an RBI in win over Duke (Apr. 3)…Hit two homers and drove in five runs at Pitt (Apr. 9)…Homered in second straight game at Pitt (Apr. 10)…Singled at Pitt to close out a six-game hit streak (Apr. 11)…Homered in a three-RBI game vs. Clemson (Apr. 16)…Had three hits in first game of doubleheader at North Carolina (Apr. 23)…Doubled in win at North Carolina (Apr. 25)…Went 2-for-3 with an RBI in win over FGCU (Apr. 27)…Had two doubles as part of a 3-for-4, 2-RBI game vs. App State (May 8)…Had two hits and an RBI vs. Georgia Tech (May 15)…Singled and had two walks vs. Georgia Tech (May 16) to close out a five-game hit streak…Homered twice in a three-hit, three RBI game at Louisville (May 20)…Homered in a 2-for-3 game vs. Florida State in the ACC tournament (May 28)…Had a hit in Miami’s final game vs. South Alabama in the Gainesville Regional (June 6).

True Freshman (2018): Played in 46 games with 34 starts in first season…Batted .234 with six doubles, one triple, three home runs and 19 RBI…Made 12 starts at third base during first half of season before switching across diamond to first base for 22 starts in second half of year…Scored 19 runs…Posted eight multi-hit games and five multi-RBI games…Scored first run of career on Opening Day against Rutgers (Feb. 16)…Collected first two hits of career (2-for-4), including double, in series finale vs. Scarlet Knights (Feb. 18)…Had one RBI, one run and one double in Game 1 of doubleheader against Notre Dame (March 10)…Connected on first home run of career in 2-for-4, two-RBI performance vs. FAU (March 21)…Set career high with three hits (3-for-5) in series opener against Virginia (March 23)…Knocked in two runs in finale against Cavaliers (March 25)…Finished 2-for-4 vs. FAU (April 4)….Hit second home run of season at Florida State (April 28)…Drove in three runs and homered in win over Bethune-Cookman (May 5), jumpstarting six-game hitting streak…Tied career mark with three hits (3-for-4) and drove in two runs against FGCU (May 9)…Had two hits and scored two runs in win at Virginia Tech (May 12)…Tied career mark with three RBI in finale vs. Hokies (May 13)…Had two hits (2-for-4) and scored two runs in ACC Championship opener against Notre Dame (May 22) in Durham, N.C….Finished 1-for-4 in ACC Championship matchup against Clemson (May 24).

High School/Prep: Selected in 37th round of 2017 Major League Baseball First-Year Player Draft by Oakland…Ranked No. 60 by Perfect Game in its top-400 freshman rankings…Four-year letterwinner at Gulliver Prep…Helped lead team to four regional appearances and two district championships…Played with Team USA 14U, 15U and 17U teams and won silver medal…Recognized with All-Dade honors…Finished high school career with .350 average, 13 home runs and 80 RBI…Batted .432 in final season at Gulliver with seven home runs and 28 RBI…Hit .360 junior year with three home runs and 23 RBI…Had .310 average with three homers and 19 RBI sophomore year.